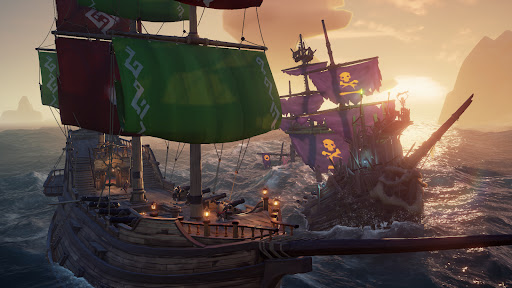 Getting stuck on the ocean in real life has no appeal to me. I’ve seen All Is Lost – no way I can do better than Robert Redford. But spend some time on Raft or Sea of Thieves?
Image: Supplied

Being shipwrecked or stuck on a small raft in a vast ocean is no joke. You might as well be crawling in a desert – and you probably have a better chance to survive than bobbing on an endless body of water. I’ve been in a few deserts, such as Namibia’s canyons and the empty quarter of the UAE. Those are not places you ever want to get lost in. But they still beat the pants off drifting in the middle of nowhere with water surrounding you.

At times, shipwrecks can become really gruesome. Théodore Géricault’s 1819 painting, The Raft of the Medusa, captured a snapshot of a terrifying ordeal where dozens of sailors shared a small raft to escape their sinking ship. Stuck there for thirteen days, some resorted to murder and cannibalism.

Fortunately, Raft has no such problems. One of my favourite games from recent years, it’s a quirky survival game that soon turns into a casual building simulator. Seriously, if you can get past the first 30 minutes of harassment by hunger and sharks, you are set for a very fun time on the seven seas.

Have all your friends been telling you to finally get Raft but you're still not 100% sure whether it's worth the $20 pricetag?

As is the case with 99 percent of survival games, Raft puts you in a post-apocalyptic world. In this case, something happened, and everything was flooded. Small islands pop up now and then, and you can discover abandoned settlements. But you’re on your own, other than a large shark that keeps following your raft and occasionally chews pieces off it. While fending off Bruce (my choice, not the game’s – the shark puppets from Jaws, named after Steven Spielberg’s lawyer), you collect resources that you float past or find while diving near islands, using these to expand your raft, build new gear and feed yourself.

Raft has an incredibly forgiving building and crafting system, and you can really go crazy. I’ve built several ships over my time in the game, ranging from a compact bachelor’s pad to a skyscraper to something the size of an ark. Eventually, you can outfit your meagre raft with sails and engines, and build a radio scanner that helps you track down story missions.

Best of all, you can play with others. Raft supports drop-in co-op for up to four players, allowing you and a few friends to create some truly excessive floating behemoths.

Raft scratches a specific gaming itch for me: casually sailing the seas. I’m not a fan of actually sailing on an ocean. I get seasick. But the digital alternatives can be terrific. Possibly the first game to nail this was Wind Waker, the sometimes-forgotten Legend of Zelda game that arrived with the Gamecube. Traversing an ocean world dotted with islands, Link used a little ship to get around. It was amazing – the rush you got when the wind caught your sails just right, the rise and fall of the waves, the squawks of visiting seagulls… magic!

The Legend of Zelda: Wind Waker HD gives us a definitive version of one of the best 3D action games ever made.

Wind Waker was the only example of a sailing adventure for quite some time. Today, though, the sub-genre seems to be undergoing a minor renaissance. Leading the pack is Sea of Thieves, made by former Nintendo developers Rare, now married to Microsoft. I was smitten with the game when it came out – the wave and sea effects are gobsmacking. You’ve not lived until you are on a deck with three mates, playing musical instruments together while your ship rips through waves, the wind strong behind her sails.

Sea of Thieves soon got old with some very repetitive game mechanics. But this past December, it pulled me back in. Now on its fifth season of content (because every multiplayer game now has seasons), there is more content, and the game is much more generous with loot. It’s still a griefer’s paradise – our last voyage ended in shambles after another crew ambushed us. But at least it’s not as hard anymore to make up for your losses. If you’ve shelved it or haven’t tried it yet, Sea of Thieves is well worth it. Try it on Gamepass, then buy it on Steam because that is what God intended.

Sea of Thieves reviewed by David Jagneaux on Xbox One, also available on PC.

As I’ve said, there’s a bit of a sailing renaissance happening here. Ubisoft got the ball rolling when it included sailing and naval combat in Assassin’s Creed: Black Flag back in 2013. The publisher is busy finalising Skull & Bones, a pirate-themed combat game due in a few months.

Last year, Team 17 released King Of Seas, a very casual sailing and combat experience that takes many of its cues from the indie hit Windward. And similar in spirit, though distinctly a battle royale game, is Maelstrom – play with two friends and crush all the other ships. It’s a fun little team deathmatch experience, yet I wish you could create private lobbies.

The list of these games keeps growing, and I’ll drop a few mentions in the notes below this column. But I want to finish with something different. The Flame In The Flood is a quirky roguelike time sink with cute graphics. You and your dog jump on a raft and ride down a large river that splits into multiple routes. Dodge debris and land at various sites to find loot, buy upgrades and avoid dangerous wildlife. It’s a simple game but very charming and addictive – not to mention rather challenging.

But we can take it because at least it’s a game. Getting stuck on the ocean in real life has no appeal to me. I’ve seen All Is Lost – no way I can do better than Robert Redford. But spend some time on Raft or Sea of Thieves? That’s amazing, especially if you can play with friends. And if you don’t have friends, cosy up to the shark. He’s not that bad once you get to know him.

An apocalyptic world with both charm and terror, The Flame in the Flood is worthy of your time. Watch IGN's review to see why.

Notes
Not everything fits into the column, so here are some extra points to chew on…

● The longest anyone’s survived lost on the oceans was 14 months – José Salvador Alvarenga spent that much time on the sea until he was eventually rescued.

● I have to mention Blackwake, the fantastic naval deathmatch game that died out too soon and just before I could reach Admiral rank.

● Or, if you want a sailing simulator, many people suggest Sailaway.

● Got a VR headset? Try out VR Regatta.

● Eugène Delacroix, a student of Géricault’s, modelled for some of the human figures on Raft Of The Medusa. You know his work – he painted Liberty Leading The People (google it, you philistine).

● I didn’t forget about games such as Subnautica, but that’s for a column about games under the water.

Farm Simulator 2022 is an enjoyable, calming simulator, peppered with beautiful environments, and filled to the brim with detailed machinery.
News
3 months ago

With the  All Stars Underground League of Legends and the  Huawei Free Fire Showdown now complete, Mettlestate still has some nice Cash Cups for ...
News
5 months ago

Twelve Minutes – a good night for a murder

Overall, Twelve Minutes is one of the most fun games I've played in a long while.
News
3 months ago