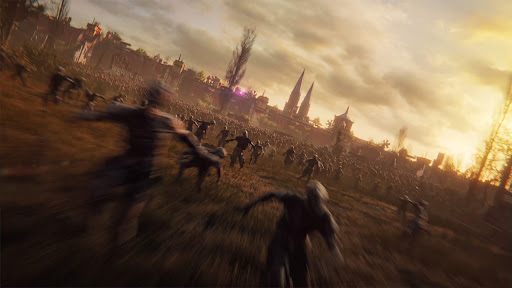 Dying Light is not a single-player game. While you definitely can play through it alone, 99.9% of the fun to be had is through playing with friends.
Image: Supplied

There are very few games that I can remember playing such an active part in myself and my friend’s online lives as Dying Light. When the game first came out, I can still remember the financial struggle we went through to get a copy and the absolute joy we experienced playing together. Now don’t get me wrong, it wasn’t all sunshine and happiness, it is because of time spent in Dying Light together that I decided if a Zombie outbreak were ever to happen, I’m shooting all my friends on day one and moving on with my life because man oh man are they everything and anything other than a group of survivors.

The number of times I died because of a flaming arrow to the heart or being driven over by a friend who thought of themselves as Mad Max is just too much to bear or admit to publicly. But through it all, we were returning to Dying Light time and time again because it was and still is one of the most fun multiplayer experiences we’ve shared. There is something about chopping a zombie’s head off with a machete, watching it fly through the air only to hit your friend, who was none the wiser, in the head that brings joy to even the stoniest of hearts. With all of these memories of times shared and enjoyed together, I went into Dying Light 2, only to be very disappointed.

Now before we go any further into this review, I want to get something off of my chest; while I was going into this game with a lot of pent up nostalgia, the problems I have with it have little to nothing to do with any disappointment felt from that end. I’m quite aware that no matter what they had done with the game, it would never be able to live up to the years of memories and love I have for the first game. HOWEVER, even if Dying Light 2: Stay Human had a different name and no ties to the franchise whatsoever, I would still have felt disappointed with the game in front of me.

One of the first hurdles I experienced was not being able to play with my friends. While I went into the game knowing cross-platform support wouldn’t be available at launch, I had mistakenly presumed that cross-generation play would at least be, how wrong I was. This meant as the only friend with a PS5, I had the option of either playing on my own and pretending my friends were with me (which I did) or playing with strangers (which I tried to do, but thanks to some fun bugs you either get kicked as soon as you join or your ping is so high you wish you could just be kicked). Here is the thing, Dying Light is not a single-player game. While you definitely can play through it alone, 99.9% of the fun to be had is through playing with friends.

So now, there I was, man alone (literally) in the zombie overridden wasteland known as Villedor. I took on the role of Aiden, a pilgrim and an outsider who had ventured into Villedor in search of his long, long, looong lost sister, Mia. Now just keep in mind, the last time Aiden saw Mia, they were wee little children, and Mia is unlikely to remember him if he managed to find her at all. It’s a story weaker than when I made myself a cup of coffee and forgot to add the coffee. From the start, I found myself annoyed by this story. SURELY in the middle of this zombie-infested world, there are more significant concerns than a bit of a family reunion, but apparently not.

While we’re still talking about the story, let’s talk about two other things, first narrative choices. Since early 2018, multiple promises have been made about how vital player choice would be inside Dying Light 2: Stay Human. I’ll give them a point for this, simply because there are hundreds of dialogue choices to be made within the game; however, I’ll also take away 10 points because if I said 1 out of every 50 choices you make makes a difference, I would be exaggerating. Also, as a side note, the voice acting in Dying Light 2: Stay Human is some of the worst my ears have ever heard since I stopped drama class. While Jonah Scott, the actor who voices Aiden, does an alright job, the talent starts and ends with his performance. And even so, while his voice acting may be great, the dialogue is so bad it brings to mind the budget soaps my grandparents used to love watching. 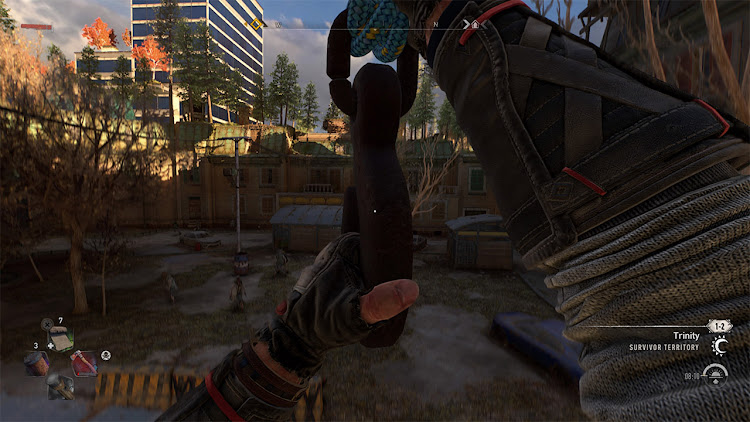 Most of the fun to be had within Dying Light 2: Stay Human was when I used the world around me as a playground. Walking through the sky on a tightrope, the wind threatening to drop me to my death.
Image: Supplied

The second thing that needs addressing is the game’s claim of 500 hours of content. I’ll be honest with you, I didn’t hate my time in Dying Light 2: Stay Human, but I can not possibly imagine anyone, regardless of playstyle, spending more than 100 hours in the game. As is, if not for playing the game to review, I would gladly have skipped every single line of dialogue and every cutscene. These only make the experience longer and take away from the one area where Dying Light 2: Stay Human does shine: The exploration (which is also not without fault, though).

Bad before good: Dying Light 2: Stay Human has a massive problem with reused assets. Now I’m not even going to talk about how most zombies look the same and wear the same clothes, and I’m not going to mention how all of the loot you pick up is identical. However, I will talk about how often I would run into a building, explore it, run into the next building, and have to do a double-take. Everything, I mean everything, would be an exact clone of the building before it. The structure, the furnishings and even the same loot to be found in the same places.

However, I would be remiss not to also talk about the good that lies within Dying Light 2: Stay Human because there is good. The game now has stats attached to all of your clothes, giving you plenty of variety when building your character up. The skill trees have also been reworked, and every skill you unlock genuinely feels like an upgrade. While at the start of the game, I very much felt myself yearning back to my time as Kyle Crane; by the end of the game, I felt like a god. With my trusted grappling hook equipped and the new edition of a glider, I could traverse the city in ways Kyle could only dream of. And when I had finally unlocked all of the parkour moves, it was a dream.

Most of the fun to be had within Dying Light 2: Stay Human was when I used the world around me as a playground. Walking through the sky on a tightrope, the wind threatening to drop me to my death. Gliding over the city or even sprinting through buildings and using zombies to vault over, that’s when I found the fun. The combat this time around is also far more melee-focused, and while I missed just sitting on top of my perch killing zombies with my bow before quickly darting down, grabbing my arrows and repeating, there is something to be said for the overwhelming feeling of constantly being in the middle of crowds of zombies. Especially considering how fast your weapons degrade as you use them, unlike in the previous game, they can not be repaired. It’s a very raw and adrenaline-fueled style of combat that keeps your heart pounding even countless hours in.

BOTTOM LINE
While there are some moments of pretty genuine fun to be had within Dying Light 2: Stay Human, it's not enough to make me want to stay in its world. Instead, it makes me want to return to the first game. I'm sure that the bugs will be patched over time, the repetitiveness of assets fixed, and the ability to seamlessly play with friends added, but I don't know if I'll care enough to want to return.

PROS
It's a zombie game
The world FEELS enormous when you're in it and when you've upgraded your character, it feels like a playground

CONS
Weak story
No cross-play or cross-generation play
Bugs, bugs and more bugs
Lots of reused assets close enough together that its impossible to ignore
Just not as much fun as the first game
TERRIBLE voice acting
60

Game Review | Tandem: A Tale Of Shadows – a journey of disappointment

Tandem: A Tale Of Shadows attempts many different things and excels at none of them. While I don't believe that a platformer needs to have a story, I ...
News
3 months ago

Even though I don't think Riders Republic is a bad game, I also don't think it's a good one.
News
2 months ago