Game Review | Kena: Bridge Of Spirits – a game to warm even the coldest of hearts 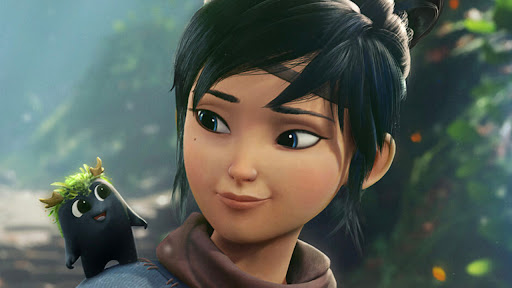 Kena: Bridge Of Spirits tells the story of a village that has fallen to ruin and been drowned by tragedy. Everyone who used to live in the village is gone, although their pain is still alive and well, poisoning the land. Players control Kena, a young spirit guide. Kena’s link to the spirit realm will allow her to help the spirits of those eaten by misfortune find the peace they so yearn for, and by doing so, she will also be able to cleanse the land once more.

But while that’s the story of Kena in a nutshell, in reality, the game is so much more. There is a strong emphasis on everything having a purpose and always being more than meets the eye. Nothing is just a thing; instead, it’s a memory of someone lost or an emotional bond to the one who made it. The push to look at things with new eyes and see beyond the veil is carried through to the gameplay.

Essentially, Kena: Bridge Of Spirits doesn’t bring anything new or groundbreaking. The melee combat feels familiar because it is. It’s the same style of melee combat we’ve seen in countless games before. The platforming sections also feel like a homecoming, and once again, it’s because it is—the same thing with the puzzles. At the surface, Kena: Bridge Of Spirits is just a reskinned version of mechanics we’ve seen repeatedly.

With its elegantly simple combat and beautiful world, Kena: Bridge of Spirits harkens back to the days of the N64/GameCube-era Zeldas, Okami, and Star Fox Adventures, while also adding modern sensibilities and a distinct personal touch.

And yet. It’s not. Take all the familiarity and mix it with the character-driven storytelling, a world that seems to come alive at your very presence and overall journey, and what you have is a game that feels entirely unlike anything else I’ve ever played; in all the best ways.

At a base level, the flow of Kena is pretty simple. Explore the environment and battle the corrupted spirits you find along the way. However, thanks to the inclusion of one of my all-time favourite parts of Kena, The Rot, there is so much more to the game. The Rot are the single cutest and most amazing little things I’ve ever seen, and I want one. But in the game, the Rot will follow Kena around and aid her through her journey. For example, during combat, the Rot can be used to either distract enemies or even help her in attacking.

The Rot added just a single extra layer of complexity and polish to Kena that I think the game would have crumbled without. Being able to utilize the Rot during combat effectively adds a level of skill beyond my using technique of hit hit hit, run run run. When you start in combat, the Rot are usually pretty scared. But as you damage and kill enemies, their confidence and courage increase, and you’ll be able to either send them into battle or use their power to empower your own.

The Rot are also vitally important for their interactions with the environment, as they are the only way to neutralize enemy spawns so battles can be won and the only way Kena can heal. The simple addition of these little balls of cuteness means you’re constantly paying attention to your environment, even during combat, preventing you from ever losing sight of the magnificent world around you.

Something else I enjoyed during my time in the game was the collectables. Kena has plenty. Kena had me constantly looking for hidden paths, lest I miss a hidden gem. From finding Rot hidden in the world to grabbing little tiny hats, you can then use to customize them, I was constantly searching and connecting with the world.

BOTTOM LINE
Kena: Bridge of Spirits is many things, but at its core, it's a story about the importance of being connected to the world around you. Through exploring the world, you'll see Kena start to make meaningful connections with the Rot and, through doing that, slowly begin to restore the world to how it once was. It's not the type of story that will have you moved to tears, but it is the type of story to warm your heart and give you fuzzy feelings when everything starts to pull together.

PROS
The game is just so amazing to look at and listen to. Like a vacation for my eyes
The story had just the right level of emotion
Even though Kena: Bridge of Spirits didn't bring too much "new" to the table, what it did bring felt like home

I would wager a bet that most gamers like myself have simple needs when it comes to load shedding. First up, we need to keep the internet router and ...
News
1 month ago

SA's top female gamers will go head-to-head this weekend for a chance to represent Team SA at the Girl Gamer Esports Festival World Finals later this ...
News
1 month ago

Diablo Immortal is currently available for download via the App Store, Google Play and can be pre-loaded on Battle.net.
News
1 month ago

In this episode, we chat to Michael James about rAge 2022, and we get an exclusive hands-on preview of cloud gaming on a smartphone.
News
1 month ago