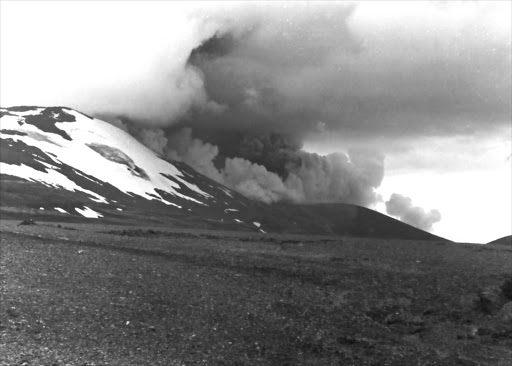 The eruption of Hekla en:August 17 en:1980 at approximately 13:40. It was taken from a position 4 km to the northeast of the volcano which had been erupting for about 10 minutes when the photograph was taken. The lighter steam in the middle distance marks the meltwater path jökulhlaup of the summit glacier that had just melted and literally cartwheeled down the mountain. The noise of the eruption was akin to a jet engine roaring at this point.
Image: Oxonhutch

The volcano is close to the ash-spewing Eyjafjoell, which last year caused the world's biggest airspace shut down since World War II, affecting more than 100,000 flights and eight million passengers.

The Iceland Civil Protection Authority told AFP it was closely monitoring the situation.

"The movements around Hekla have been unusual in the last two to three days," University of Iceland expert Pall Einarsson said.

While this might not necessarily mean an immediate blast, "the volcano is ready to erupt," he stressed.

"The mountain has been slowly expanding in the last few years because of magma buildup," he explained.

The volcano, dubbed by Icelanders in the Middle Ages as the "Gateway to Hell," is one of Iceland's most active, having erupted some 20 times over the past millennium, most recently on February 26, 2000.

It measures 1,491 metres and is located about 110 kilometres (70 miles) east of Reykjavik, not far from Eyjafjoell.

The news comes just over a month after this year's violent eruption at the Grimsvoetn volcano, in the southeast of the country. That eruption subsided after less than a week, having spit out far more ash than Eyjafjoell, but due to more favourable winds for Europe caused far less air traffic disruption.

Both of Iceland's latest eruptions provided warning signs several hours before, but Hekla is known for having a very short fuse.

"Hekla never gives you much of a warning," Einarsson said, pointing out that in 2000, it began rumbling an hour and a half before the outbreak of magma, which "was actually an unusally long warning. In 1970 we only got 25 minutes notice."

Rongvaldur Olafsson, a project manager at the Icelandic Civil Protection Authority, said no immediate safety precautions were being taken but: "We will watch the mountain and developments very closely."