Lab-on-a-chip may be game-changer in disease detection 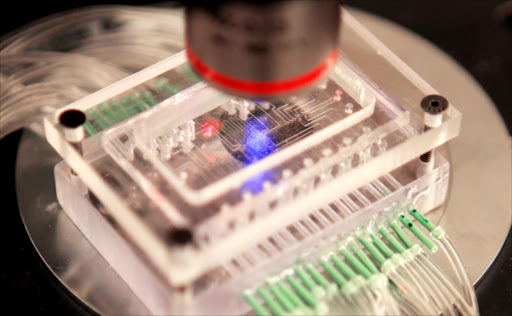 A cheap, highly portable blood test has proven as accurate as expensive hospital-based analyses in detecting HIV, syphilis and other infectious diseases, according to a study released Sunday.

The so-called "mChip", they said, could help knock down three barriers to effective delivery of health care into the world's poorest regions: difficult access, high costs and long delays for results.

"The idea is to make a large class of diagnostic tests accessible to patients in any setting in the world, rather than forcing them to go to a clinic to draw blood and then wait days for their results," said Samuel Sia, a professor at Columbia University and lead developer.

The findings were published in Nature Medicine.

With a projected production cost of a dollar per unit, the mChip would be far cheaper to administer than current lab-based tests.

Because it can scan for multiple proteins, each corresponding to a disease, at the same time with a single blood sample, it is probably even cheaper -- and more accurate -- than strips which work like store-bought pregnancy tests.

"Current rapid HIV tests require subjective interpretation of band intensity by the user that can result in false positives," that is, healthy individuals being misdiagnosed, the study noted.

The mChip, by contrast, allows for measurement using a hundred-dollar handheld instrument no more complicated to use than a cell phone, according to the researchers.

Finally, the device produces results in minutes rather than days or weeks, a time saving that can make a big difference in treatment outcome.

Unique disease "biomarkers" contained in a pin-prick blood sample bind to one of up to 10 individual detection zones.

A nano-scale gold "reagent" -- which detects a substance via a chemical reaction -- is injected, followed by a silver one that interacts with the gold to produce an ultra-thin film.

"The darkness of the film is proportional to the concentration of biomarker in the sample," said Linder, comparing the steps to the development process in non-digital photography.

The results are measured with a LED-based detector, or can be assessed by the naked eye.

In Rwanda, Sia and colleagues tested the device in Muhima Hospital in Kigali, where on-site results currently take days or weeks because samples must be sent to an outside laboratory.

From a total of 70 specimens with known HIV status, half male and half female, only one tested false, a result that rivals the accuracy of lab-based HIV analysis.

Similar tests on more than 100 archived specimens yielded equally reliable results, as did further trials based on samples from female sex workers known to be infected with both HIV and syphilis.

The researchers hope the device will boost testing of pregnant women, especially in Africa.

Currently, barely a quarter of pregnant women in low- and middle-income countries are tested for HIV, a figure which provides scant hoping of reaching the UN goal of eliminating mother-to-child transmission by 2015, according to the 2010 UNAIDS Report on the Global AIDS Epidemic.

In Zambia and the Democratic Republic of Congo, for example, only nine and six percent, respectively, of pregnant women currently receive HIV testing, according to the report.