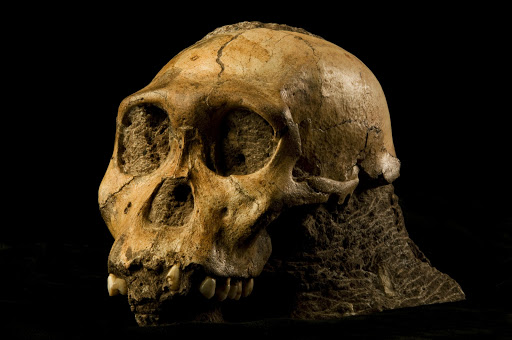 The cranium of Malapa hominid 1 (MH1) from South Africa, named "Karabo". The combined fossil remains of this juvenile male is designated as the holotype for Australopithecus sediba.
Image: Prof. Lee R. Berger

She swung in the trees like a chimp but had long dexterous fingers for tool-making and hybrid feet for walking upright, a study out Thursday on the ancient hominid Australopithecus sediba suggested.

Until now, the first tool-maker was widely believed to be Homo habilis, based on a set of 21 fossilised hand bones found in Tanzania that date back 1.75-million years and a collection of artefacts.

But a close examination of two partial fossilized skeletons of Au. sediba discovered in South Africa in 2008 suggests these creatures who roamed the Earth 1.9-million years ago were crafting tools even earlier, and could be the first direct ancestor of the Homo species.

Based on the most complete hand specimen ever found, Au. sediba had an extra-long thumb and powerful fingers, which it could have used to make tools despite still having a small ape-like brain, suggested the findings in the journal Science.

The rare discovery of hand bones belonged to an adult female who may have been about 20 or 30 when she died. Her remains were found near a young boy, whose fossilised bones were also included in the study.

"The sediba hand reveals a surprising mix of features that we wouldn't have predicted could exist in the same hand," said co-author Tracy Kivell from the Max Planck Institute for Evolutionary Anthropology in Leipzig, Germany.

"It has this long thumb, but surprisingly this thumb is even longer than we see in modern humans," she said.

"The wrist was better able to deal with larger loads that it might experience during tool use for example," and it had long narrow fingers "capable of powerful grasping," she added.

"So this mix of morphology suggests to us that sediba likely still used its hands for climbing in trees... but it was likely also capable of making the precision grips that we believe are necessary for making stone tools."

Other body parts featured in the study were sediba's small but advanced brain, its pelvis reflecting an upright posture, and a unique foot and ankle that "combines features of both apes and humans in one anatomical package," said project leader Lee Berger.

Berger, an American who is a professor at South Africa's University of the Witwatersrand, and his nine-year-old son discovered the fossil site of Malapa, north of Johannesburg, in 2008.

The site has since yielded more than 220 bones from at least five individuals; some babies, juveniles and adults.

The female's foot and ankle bones, some of the most complete specimens ever found, surprised paleoanthropologists because of their odd mix of a human-like foot arch and Achilles tendon, but a heel and shin like that of an ape.

"If the bones had not been found stuck together, the team may have described them as belonging to different species," said co-author Bernard Zipfel from the University of the Witwatersrand.

The analysis by a team of 80 international scientists offers new clues into how the transition from ape to human may have occurred, but also raises plenty of questions about the evolution of our species.

Scientists aren't sure if the Homo genus, which includes contemporary humans, evolved directly from the Au. sediba, or if Au. sediba was a so-called "dead-end" species and the Homo genus evolved separately.

One of the main problems facing paeloanthropologists is that little is known about the skeletal characteristics of the Homo habilis, so even though sediba is well-defined there is an absence of evidence for comparison.

However, the findings suggest sediba is "squarely in the potential for the ancestor leading to the emergence of the genus Homo," said Berger.