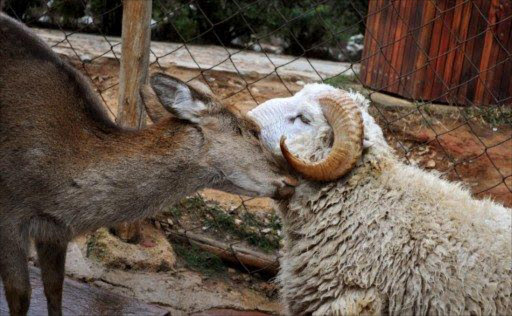 A ram named Changmao who has formed an inseparable bond with a female deer named Chunzi, spend time together at the Yunnan Wild Animal Park in Kunming, Yunnan Province
Image: STR

Chinese web users have flooded a wildlife park with pleas for an  amorous male sheep and female deer to be allowed to stay together after their mating habits raised concerns.

Staff at the wildlife park turned to the country’s half a billion web users for advice after the deer and the ram — whose Chinese name Changmao means Long Hair — began their unconventional  liaison.

Their romance made headlines in China after a local television station in the southwestern province of Yunnan picked up on the story, reporting that attempts to separate the pair had been unsuccessful.

By Thursday, the story of the inseparable pair had inspired more  than 1,700 comments on China’s weibos — microblogging services similar to Twitter that have taken the country by storm in recent years.

“I cried when I watched the video, this is love... they have overcome the obstacles and are finally together,” posted one user under the name Qianjiang.

Another, posting under the name timm—tina, said the story of the  inseparable pair had “made me trust love again”.

“Love between a sheep and deer is wonderful, perhaps something strange will be produced, I urge everyone to watch this closely,” said another, posting under the name beibei5332.