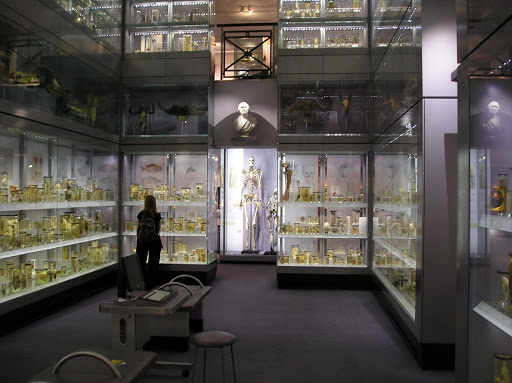 A part of the Hunterian Collections on display at The Royal College of Surgeons of England.
Image: Paul Dean

Experts are calling for the skeleton of Charles Byrne, the "Irish giant", to be removed from a London museum where it has been on display for almost 200 years and buried at sea, as he wanted.

Standing at seven feet seven inches tall (2.3 metres), Byrne was a legendary figure and when he died in 1783 at the age of 22, the celebrated surgeon and anatomist John Hunter was keen to acquire his skeleton.

According to a new article in the British Medical Journal (BMJ), Byrne was terrified of becoming one of Hunter's specimens and wanted to be buried at sea.

But the surgeon managed to bribe one of the Irishman's friends and took his body before it could be laid to rest in the English Channel.

Hunter boiled Byrne's body down to a skeleton and it became a key feature of his anatomy collection. This was later displayed at the Hunterian Museum at the Royal College of Surgeons in London, where it remains today.

In the BMJ article, experts acknowledge the role the skeleton has played in research, including by helping link acromegaly -- an unusual condition where someone makes too much much growth hormone -- and the pituitary gland.

But Len Doyal, emeritus professor of medical ethics at Queen Mary university in London, and Thomas Muinzer, a lawyer at Queen's University Belfast, say it is now time to grant Byrne's wish and give him a peaceful burial at sea.

"The fact is that Hunter knew of Byrne's terror of him and ignored his wishes for the disposal of his body. What has been done cannot be undone but it can be morally rectified," they write.

"Surely it is time to respect the memory and reputation of Byrne: the narrative of his life, including the circumstances surrounding his death."

They argue that Byrne's DNA has now been taken and can be used in further research, while his skeleton can be replaced by a fake for the purposes of public education.

"As a sign of respect for Byrne's original desires, his skeleton should be buried at sea as part of a ceremony commemorating his life," they write.