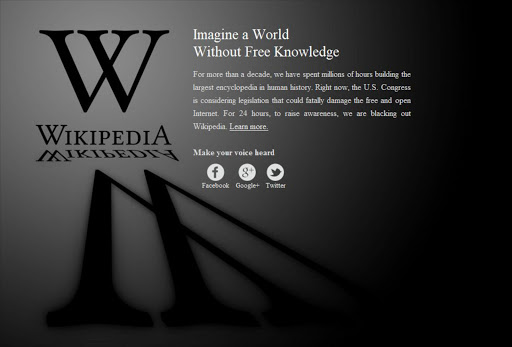 Wikipedia has blacked out its front page urging users to “Imagine a world without free information”, while Greenpeace International’s website has been replaced with a letter titled “We’re sorry, you’re not allowed to read this.”

Though Google hasn't blacked itself out, its US webpage has placed a link under its search bar urging Americans to contact Congress to put an end to the bills.

While Sopa has been shelved indefinitely in the house of Congress due to the strong public outcry, the Senate version dubbed the Protect Intellectual Property Act is still being debated.

Both bills have been roundly criticised on several fronts, including practical issues such as the threat they pose to online security and the basic architecture of the Internet, economic concerns such as their impact on small online businesses, and ideological issues with what the bills mean for freedom of speech.

However their supporters, essentially the Entertainment Industry and the US Chamber Commerce, have argued that piracy is threatening their businesses. Experts in online piracy have however responded that these bills will prove ineffective at tackling the issue, as pirates can work around the measures the bill prescribes.