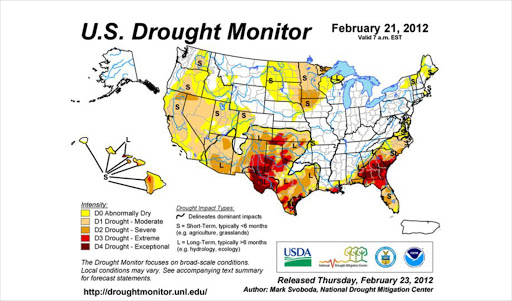 A screen shot of the US drought monitor for February.
Image: US Drought Monitor

Nearly two-thirds of Americans believe that climate change is real -- the highest level in two years -- as the public trusted its own observations of rising temperatures, a poll says.

The growing acceptance of global warming comes despite fierce political division over the issue in the world's largest economy, with proposals to mandate cuts on carbon emissions failing in Congress.

Sixty-two percent of Americans agree that there is solid evidence that the Earth's average temperature has been getting warmer over the past four decades, according to the survey by the University of Michigan's Gerald Ford School of Public Policy and the Muhlenberg College Institute of Public Opinion.

In the survey, almost half of Americans who accepted global warming said that they were primarily convinced by personal observations of warmer temperature or weather changes.

Nine of the 10 warmest years in history have taken place since 2000, according to US space agency NASA.

Last year broke records for severe weather in the United States, with extreme events such as tornadoes and tropical storms causing more than $55 billion in damage, according to the National Oceanic and Atmospheric Administration.

Some leading Republicans including candidates seeking to replace Obama doubt that human activity is causing climate change, with some lawmakers arguing that environmentalists want to hurt business interests.

The survey had found that 65 percent believed in climate change in fall 2009, with the figure slipping to 52 percent the following spring amid staunch opposition in the Senate to a proposal on fighting climate change.

The latest survey took opinions by telephone of 887 US residents in December, with a margin of error of 3.5 percentage points.