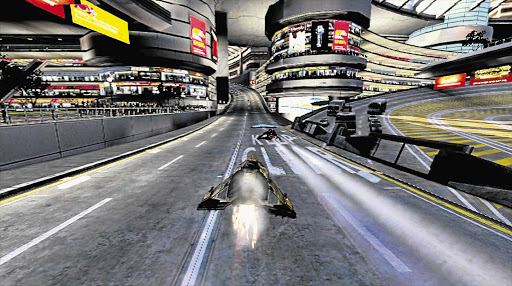 In the Playstation Vita's release stable, Wipeout 2048 stands out as one of the few contenders as a system seller.

Unfortunately, it is a little too basic to pull that off, though it is still a good game.

As a prequel to the Wipeout series, Wipeout 2048 takes place in a future where anti-gravity racing is just starting to take off.

This means the vehicles are more primitive, and the visuals seek to blend the modern with the futuristic courses we are used to.

This translates into gameplay with the controls being a little bit too loose, making it harder to hit power-ups and speed-up pads, and the aesthetics are just a touch confusing.

That said, it is still Wipeout and plays like a much faster-paced, more challenging Mario Kart. The variety of weapons and tracks maintain the series' reputation for fast-paced fun.

Further, a lot of gamers are reporting that they find it easier to use the D-Pad controls (the cross shape on the left of the system) instead of the joystick. Personally, I didn't find the joystick to be a problem.

This game does not really make full use of the Vita's controller, and, while you can steer using motion controls and the back touch pad to accelerate, it is far more comfortable to use the standard controls.

I found the racing to be challenging, but the right kind of challenge in that it doesn't make you throw away the console screaming with frustration. It makes you grind your teeth and think "I will beat you".

The major weakness, however, is that the game doesn't really give you much chance to personalise your vehicles. Aesthetically they stay the same, and as you gain ranks, you don't get to pick the vehicles that come with them. The music is acceptable, though not terribly memorable for me. It might be that a lot of it is the sort of thing that I associate with futuristic settings.

This game is fun, and addictive, but it feels like this prequel is a step backwards for the series.

Fast-paced and fun racing. What it does, it does very well.

It lacks that extra something to push it from good to great.