Chad battles poachers in war to save elephants 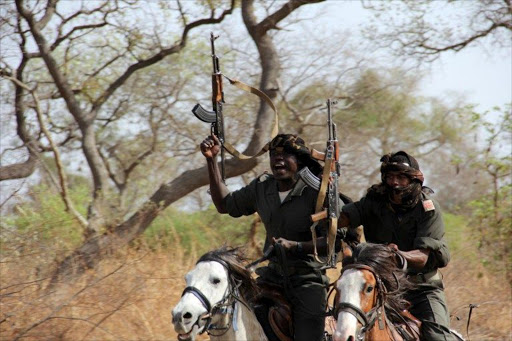 Guards exercice during a parade in Zakouma National Park, 800 kms east of N'Djamena in Chad. 90 percent of the elephants of the park have been poached in the last decade.
Image: JEAN LIOU / AFP

In an isolated wilderness in Chad, a war is being fought to save central Africa's decimated elephant herds from gangs of ivory poachers.

The frontline is the southern Zakouma National Park: a 3 000-square-kilometre sanctuary that has lost 90 percent of its elephants in the last 10 years.

The reserve now uses paramilitary-style tactics, with 60 guards who act like soldiers and a new 15-member rapid reaction force.

"The poachers are heavily armed, determined, motivated," said Patrick Duboscq, a former police officer from France who trained the group.

The shift to beef up the protection came two years ago when the South African conservation group African Parks took over management of Zakouma.

The first step was establishing a permanent presence in the reserve, which had been abandoned in the summer wet season when most of the park is under water.

Airstrips were built and the monitoring system was streamlined --including fitting 14 elephants with satellite tracking devices that transmit their location six times a day.

Being aware of the elephants' movements means that the anti-poaching patrols can be sent out to the right spots in and around the vast park.

"The only way we can save the elephants in Chad is by knowing where they are going," said Lorna Labuschagne, head of logistics in Zakouma.

As a result the elephant massacre has been stemmed - just 13 have been lost since 2011. And the once highly stressed animals have started to breed.

But the takeover did not go smoothly.

In September 2012, six guards were killed in a suspected reprisal attack a few days after raiding a poaching camp northeast of the park.

"It had a huge impact on our operations and on the morale of the guards. We were quite shocked that guards out there just to protect elephants were just slaughtered like that," said Rian Labuschagne, Zakouma's manager.

The information collected then confirmed what the conservationists already knew: based in Sudan, the poachers are heavily armed, well-organised and have a good knowledge of the bush.

Several are Janjaweed, the state-backed militias known for atrocities in Darfur in western Sudan, which was plagued by a bloody civil war for 10 years.

"Now that they do not get the support of the Sudanese government, all those groups are still there, the Janjaweed are a sidelined group of people, very frustrated," he told AFP.

"They have been involved in ivory hunting for years," he added.

With cheap firearms and ammunition and the rocketing price of ivory, more people are getting involved.

In response, the park's show of force has been accompanied by a strengthening of the information network among locals.

"Even if we tripled the guards, physically you are not going to be able to protect these elephants in the last areas they move, you have to rely on good information and cooperation with the communities and with the local authorities," said Rian Labuschagne.

"And that will enable you to put your guys in the right place at the right time."

And there are worries that Zakouma's toughest fights may yet be ahead.

Conservationists fear that once the gangs have torn through the region's easier targets, they will turn to Zakouma.

According to the latest figures available, some 25 000 elephants died in Africa in 2011 alone, about five percent of the entire population, with central and west African elephants hard-hit.

The bloodbath is being driven by poaching gangs who move with impunity between Sudan, Cameroon, Chad and the Central African Republic.

"Zakouma is the only protected area" in Chad, said Stephanie Vergniault, a Frenchwoman who founded the SOS Elephants association.

Some 89 elephants were killed in one night in Southwestern Chad in March by a gang of suspected Sudanese poachers who had killed more than 300 elephants in Cameroon last year.

"One by one, all the other elephants in Chad are being slaughtered before our eyes," said Vergniault.