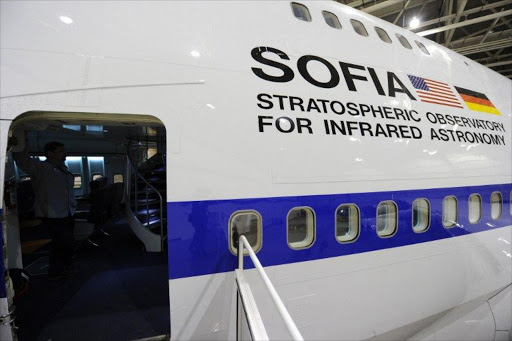 The world's largest airborne observatory took off from the New Zealand city of Christchurch on a mission to explore the southern hemisphere skies.

The flight is the first of a series of southern explorations for SOFIA, the Stratospheric Observatory for Infrared Astronomy, a joint project between NASA and the German Aerospace Center (DLR).

The airborne observatory consists of a 2.5 metre diameter telescope mounted inside a modified Boeing 747SP, which flies at altitudes of up to 13,700 metres.

The telescope will have its sights trained on the Milky Way galaxy, with scientists taking a closer look at young stars, star-forming regions and supernova remnants in the southern Milky Way.

Scientists are hoping the flights will help them to understand more about the development of galaxies and the formation and evolution of stars and planetary systems from interstellar clouds of gas and dust.

Heinz Hammes, DLR's telescope chief engineer, said: "We are looking for objects which we can see in the infra-red band of the spectrum and with infra-red astronomy we can see . through dust clouds into what is happening within."

He said it was a good time of year for the flights to take place.

"It is very dry here in the stratospheric region which is what we want to have but it is also winter and that means there are long nights so we can do very long flights full of observations."

SOFIA will be based in Christchurch until August 2, with scientists hoping to make nine 10-hour flights during that time. It is likely to be the first of many trips to New Zealand for the science mission, with SOFIA expected to continue to visit the country over the next 20 years.