Fuel being pumped out of Buffels Bay wreck 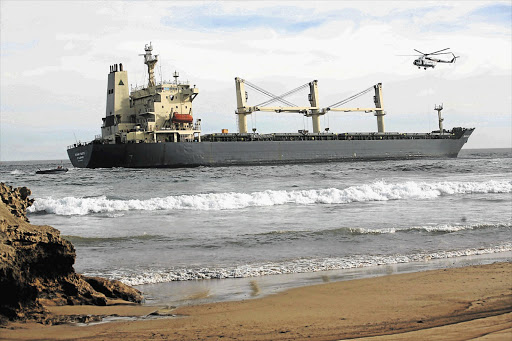 RACE AGAINST TIME: Attempts are being made to salvage and refloat bulk carrier Kiani Satu, which was driven aground at Buffels Bay near Knysna in the Western Cape on Thursday last week Picture: EWALD STANDER

Fuel oil is still being pumped from the engine room of the leaking cargo ship Kiani Satu to higher parts of the vessel, the SA Maritime Safety Authority said.

The ship ran aground off Buffels Bay, near Knysna, last week.

"We are pumping fuel internally from the engine room into a void space - so that if the engine gets damaged there is nothing in there," Samsa spokesman Captain Nigel Campbell said.

The safest way to remove more than 300 tonnes of oil from the ship was to fly it off in plastic tanks, he said.

"Today (Thursday) we will receive a sample of the three tonne plastic tanks from the manufacturer."

Campbell said a minimum of 100 helicopter trips to and from the ship would be required to transport the oil.

The flights would only be made if weather conditions were safe.

Other ways to lighten the ship included dumping its rice cargo into the sea.

"We've looked at every possible option, it's one of the plans we are working on," Campbell said.

Off-loading the rice was less risky than spilling fuel into the sea.

On Wednesday, Campbell said the ship had moved 45 degrees away from the beach, considered good news.

Six salvage experts were on the ship monitoring the pulling gear so that it did not break.

Campbell said the weather was slowing down the process.

The 168m bulk carrier ran aground at dawn last Thursday off Buffels Bay, forcing the captain and his 19-member crew to abandon ship.

It had developed mechanical problems in heavy seas while carrying 330 tonnes of fuel oil and 15,000 tonnes of rice.

Campbell said 322 people - including police, disaster management, and other government officials - were involved in the operation.