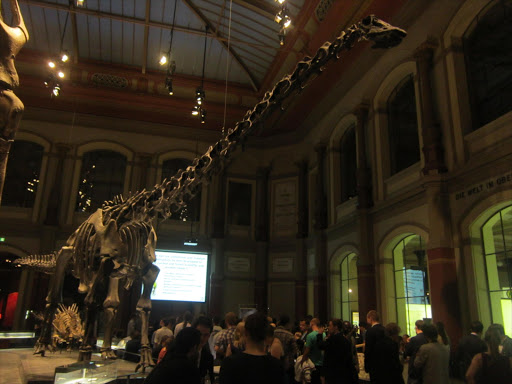 Calling all fossil hunters with £600 000 (R9.59 million) to spare: the full skeleton of a huge diplodocus dinosaur is to go on sale in Britain next month.

Nicknamed Misty, the 17-metre-long (56 foot), six-metre-tall fossil dating back some 150 million years is one of only a handful of other known examples in the world.

Found in the US state of Wyoming by the young sons of a famed dinosaur hunter, it will go on sale at the Summers Place auction house in Billingshurst, southern England, on November 27.

"There is a high chance that a museum will buy it, but in theory individuals could buy it as well," Silke Lohmann, spokeswoman for the auction house, told AFP.

Known by the Latin name Diplodocus Longus, the iconic plant-eating dinosaur was one of the largest animals to have ever walked the earth.

Full diplodocus skeletons are so rare that even the famous "Dippy" in London's Natural History Museum is actually a plastercast drawn from two different skeletons.

Misty was found in 2009 when US dinosaur hunter Raimund Albersdoerfer, who had been taking part in an excavation at a privately owned quarry in Wyoming, sent his sons Benjamin and Jacob to dig in an area nearby.

He was astonished when they returned at the end of the day to say they had found an enormous bone.

Nine weeks later Misty had been dug out. She has since been restored at a laboratory in the Netherlands.

The skeleton is part of a wider sale called "Evolution" which also includes dodo bones.

Curator Errol Fuller said of the diplodocus skeleton that there were probably only "six of these in the great museums of the world, including in Pittsburg and Washington".

"You are talking about a very rare item indeed. Even if you were lucky enough to find one in the first place, the digging out and the preparation then involved is an enormous undertaking," Fuller said.