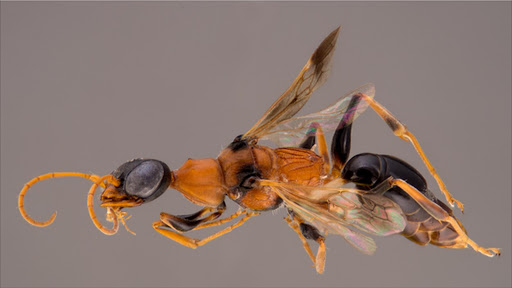 When given the chance to name a new species of cockroach wasp, museum visitors settled on referencing Harry Potter's dementors.

In an event in which 300 Berlin museum visitors were given a chance to vote on a new name for the species, after seeing a video describing it, they settled on naming it Ampulex dementor because of how it paralyses its prey before eating, according to PloS One.

"The dementor's fictional behaviour and effects reminded us of the effect of the stinging behaviour of Ampulex on the behaviour of its cockroach prey."

"After being stung by the wasp, specific behaviours of the cockroach are inhibited (e.g. escape behaviour) while others are unaffected (e.g. locomotion).

"The wasp grabs the partly paralysed cockroach by one of the antennae and guides it to a suitable oviposition location, the prey following the wasp in a docile manner. This is a unique strategy of behavioural modulation of a prey by a wasp's sting," the museum operators wrote.

According to the study, allowing the public to vote on new species names proved to be a great hit with visitors, with the visitors showing great interest in the species as a result.

"Upon request, visitors clearly indicated a personal bond to the species to be named and curiosity regarding this unexpected opportunity to participate in the naming process.

"Even more, some visitors also pointed out that having been involved in the naming process of the new wasp species had changed their personal perception of insects and this unexplored part of nature in a positive way," the researchers wrote.