Powering the Great Karoo with a giant SA Flag 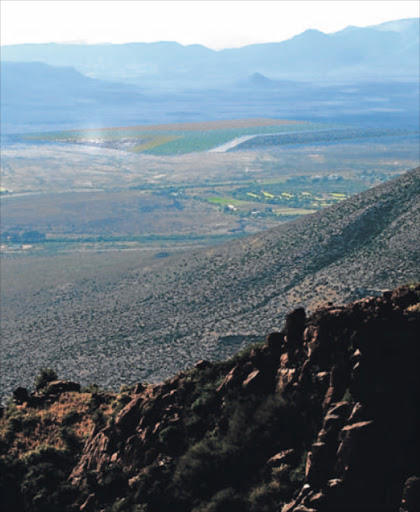 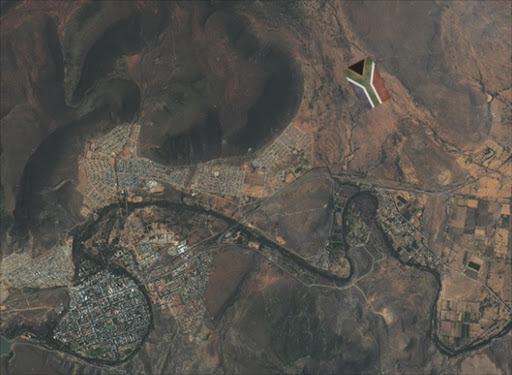 A team of dreamers want to adorn the Great Karoo with a 66-hectare South African flag, using a palette of millions of succulents, cacti and solar panels. The message to frackers and cynics will be hard to miss, writes Kevin Bloom

We should start, perhaps, with a quick word on faith. Not faith as defined by a theologian, mind you, because that would be inappropriate, but faith as softened and made palatable by that sexiest of 19th-century philosophers — Søren Kierkegaard, the Dane who died alone and unloved in 1855, yet who by 1964 had been deified by Life magazine as the progenitor of modern existentialism.

Anyway. “Faith is the highest passion in a human being,” Kierkegaard wrote, in his everfecund Fear and Trembling. “Many in every generation may not come that far, but none comes further.”

If there is an aphorism better suited to the men and women responsible for the creation of that giant flag near Graaff-Reinet — that 66-hectare South African flag to be made up entirely of semi-desert plants, which will be visible from the Joburg-George flight path — then this writer is all ears.

Faith, after all, is what’s at stake here — faith, that thing on the far side of reason.

Take Derek Light, for instance. It’s a Thursday morning in the country’s fourth oldest town. The walls of his office exude the Calvinist resolve of two centuries. Derek is hedging. “It’s almost cheesy,” he says. “But then when you stop to think about it, it’s not.”

As Graaff-Reinet’s pre-eminent lawyer, the man who is representing hundreds of locals in a semi-celebrity death-match against Dutch petroleum giant Shell, you’d think that a visit from a Big City journalist wouldn’t scare him. And yet, I suspect, Derek’s been rehearsing his lines. “There’s nothing in it for me,” he says. “I serve as a trustee on a charitable trust. I’m doing it because it’s something that this community, this country, needs.”

I, for one, believe him. Professionally speaking, I shouldn’t tell him I believe him, but speaking from the gut, I do.

He relaxes, insists that I address him by his Christian name, and devotes the next hour (in un-billable lawyer minutes) to an outpouring of his soul.

“Life is funny,” he tells me, shaking his head like a person who just got the joke, “but here I am, a conservative attorney, involved in these causes that somehow seem linked. The Giant Flag shows up Shell and their fracking promises in so many ways.

“For example, fracking in America has gone from boom to bust in five years, because frenzied exploitation has led to its downfall. So it turns out that this technology, which will destroy the Karoo, is unsustainable, whereas the Giant Flag is… is…”

“A virtuous, self-reinforcing circle?” I interject, forgetting again my ethics.

The project will extend over decades, and covers not just Graaff-Reinet but the greater Camdeboo municipality, including the towns of Aberdeen and Nieu-Bethesda. According to the brochure, it is designed to “generate a socio-economic shift so effective that it will change the course of that community forever”.

The planting phase, an 18-month undertaking that requires the cultivation and relocation of a staggering 2.5 million cacti and succulents, will provide employment for 700 locals, with an eye to up-skilling and more permanent “green collar” jobs in the secondary phase. The “black triangle” of the flag will be comprised entirely of solar panels, generating 4 megawatts of power: around 35% of Graaff-Reinet’s needs, or enough for 4 500 homes.

Meanwhile, all public tenders will favour Camdeboo citizens and companies, an endowment fund will be set up to finance “low carbon” business plans of a similar bent, and the 20 000 square metres of space beneath the solar canopy will be the tourism HQ — get your flag honey from the beehives that pollinate the plants; book a sunset flip over the desert in a hot-air balloon; adopt and plant your own baby succulent for you and the kids to come back and visit next year.

So what, then, is the hold-up? Why all this talk of faith?

The Giant Flag, if you haven’t already guessed, has been besieged by its own wholesomeness. Four years ago, around R1-million in seed capital was signed over by Princess Irene of Holland, who has a farm in the region. Since then, the Camdeboo municipality has committed 100 hectares of land, and the Eastern Cape Development Corporation has put up the money for an environmental impact assessment — approved in October 2012.

Proudly South African has identified the project as “low-hanging fruit”, and has earmarked it as their “first initiative”.

The SABC Foundation has donated airtime for a 54-episode series of two-minute mini-documentaries, to be filmed over the course of the project’s implementation.

Problem is, the R10-million capital grant from Development Bank South Africa is locked up — before they release the funds, DBSA want the trustees to raise tens of millions more. Which means that, as per the laws of entropy, the potential grant by the Nedbank Foundation “for training and salaries on the botanical element”, with whom the Giant Flag Trust has been in exploratory discussions, remains that much further off. It’s a question, quite literally, of belief in the intangible. A question of who will take the proverbial leap.

The origins of the project

“Yeah, sure, I hate the optimistic glossing over as much as the next person,” says Guy Lieberman, the Giant Flag’s founder, as we skirt Angel Park and head south on the R61. “The clichés we have in this country, those things are fleeting. But the thing about our national flag is that it’s not fleeting. It will survive for a long, long time. It enables us to look at what’s possible.”

We’re on our way to visit the man whose job it will be to maintain the health of the succulents, and I want to make sure (once again) that I’m not sacrificing the health of my judgment. “The South African flag,” I’d said to Guy a few minutes earlier, “seriously? Patriotism, nationalism, you’re selling us an ism? Think of the rednecks who fly the Stars & Stripes, the wankers who go to war for the Union Jack. Think of the people who still say stuff like ‘rainbow nation’.”

Guy is proving incredibly tough to rattle. Grinning, humming a tune, pointing out landmarks through the windscreen as though Graaff were his hometown. He’s a Joburg boy, 43, musician wife and two young kids.

He baits me straight back. He repeats the founding narrative.

In 2010, he says, John Dixon, the outgoing CEO of the advertising agency FCB, wanted to extend the “Keep Flying” campaign that had run for 40 emotional days after the end of the World Cup. Dixon thought that Guy, who was then in charge of the agency’s “green” division (a nice-to-have as far as the corporate clients were concerned, but too commercially soft to be taken seriously) was the perfect, uh, guy for the job.

Racking his brains for a concept, Guy remembered his visit to the Valley of Desolation in the Camdeboo National Park the previous December. “It was an epiphany,” he reminds me.

“You’ve seen how spectacular the world is from up there. It just hit me.” Naturally, this was followed by the “founding phone call” which, since we are now pulling into the plot of the man who was on the other end of the line, Guy reminds me of too. “So I say, ‘Anton, I have a strange question for you. If someone wanted to create a huge South African flag entirely out of succulents, would there be plants for all the colours?’ Anton just says, ‘Ja’.”

Anton is Anton Bouwer, the owner of Obesa Nursery, one of the largest cacti and succulent nurseries on earth. To Guy, Anton is practically family. Dan Lieberman, the late ethno-botanist famous for his research into the healing properties of the Gabonese iboga bark, was en route to Anton’s nursery when the car he was in overturned.

The previous day, Guy had stopped on the verge of the N9 about 10 clicks north of town. “So this was my brother Dan’s launch pad,” he’d said. “When the project is properly a go, we’ll put up a plaque.”

And Anton, it appears, could not have asked for a stronger sign that the project will “properly be a go” than the Toyota Fortuner that has just come to a halt in his drive. One of six in a fleet donated by Toyota in late 2014 — with more to come — its panels are emblazoned with silhouettes that invoke the Camdeboo hills, the colours of the flag rendered in serrated shapes that invoke the plants that surround us.

“Beautiful,” he says, simultaneously pumping Guy’s hand and patting him on the back. “This makes it feel real.”

Anton’s life story, it turns out, is told at the intersection of intuition and destiny — as a boy, instead of going to school, he would leave the house in his uniform and wander off into the Karoo; there, without asking why, he let himself be smitten by the ecosystem that accounts for a third of the world’s known succulent species. “Man, they are just so pretty,” is how he explains his enduring love affair with these plants.

“I can’t describe it, but it has something to do with their geometry and adaptability, with their ability to thrive in a place where other things simply die.”

Meaning, from Anton’s perspective, they are the most fitting plants for the flag. “The Eastern Cape has SA’s highest unemployment rate. So if you want to pull off something viable and sustainable here, you have to use plants that can look after themselves,” says Anton.

“Today nobody will stop with faith: they all go further.” What Kierkegaard meant by these words was that people “today” assume that faith is for children; that the reasonable world of the adult demands we leave that all behind. If it was true in Denmark in 1843, it’s certainly true in South Africa now.

Thing is, Søren Kierkegaard, the so-called father of existentialism — a worldview synonymous with atheism — wrote this sentence in the context of his most passionately argued thesis: the thesis that a human being can sit and pontificate for as long as he wants, the only proof that he has “spirit” is when he resolves to act.

“I always tried to avoid Guy,” Jimmy Joubert, chief financial officer of the Camdeboo municipality — and one of the Giant Flag’s five trustees — admitted to me. “It was my perception at first that this was a political ploy. I liked what I saw, but it looked like a DA project.”

As an ANC stalwart, Jimmy now sits on the board with Samantha Jankovich, the local DA councillor. Both the ANC and DA, keen to bring development to the Karoo, cautiously support fracking — but it seems that Jimmy and Samantha, get on just fine with Derek. The official launch of the Giant Flag, set for October 2014, on the new deck above the Valley of Desolation (paid for by Montego, Graaff-Reinet’s very own pet food company) is something that keeps them all up at night.

There remains the small problem of money: although Google have promised free Cloud services and an AdWords Grant in perpetuity for the life of the Giant Flag, that doesn’t necessarily mean the crowds are going to donate.

A 66-hectare South African flag comprised of 2.5 million cacti and succulents? The “leap of faith,” suggested Kierkegaard, who coined the phrase, will always be a personal act of courage — because the cynics, the fearful, the worshippers at the altar of reason, will always look for (and find) excuses in logic’s gaps.

To make a contribution to the Giant Flag crowd-funding campaign, log on to www.giantflag.co.za

This feature was adapted from an article  published in the Sunday Times Lifestyle Magazine on 26 October 2014.