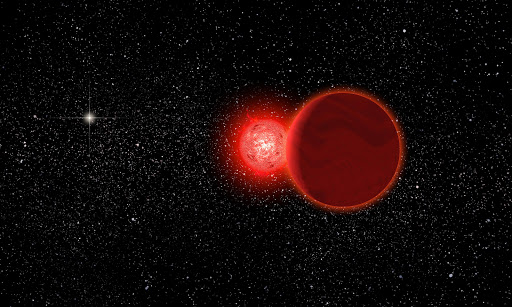 Artist's conception of Scholz's star and its brown dwarf companion (foreground) during its flyby of the solar system 70,000 years ago.
Image: Michael Osadciw/University of Rochester.

A recently discovered stellar neighbour penetrated the edges of our solar system at around the time that humans began spreading from Africa into Eurasia according to a report.

In 2013 scientists with Nasa's wide-field Infrared Survey Explorer (WISE) mission found a red dwarf star that was orbited by a brown dwarf companion about 19.6 light years away according to Nature.

The star, nicknamed Scholz’s star after the German astronomer who discovered it, was speeding away from us.

Astronomer Eric Mamajek at the University of Rochester in New York led a team which traced the star's trajectory.

“The small tangential motion and proximity initially indicated that the star was most likely either moving towards a future close encounter with the solar system, or it had ‘recently’ come close to the solar system and was moving away. Sure enough, the radial velocity measurements were consistent with it running away from the Sun’s vicinity – and we realised it must have had a close flyby in the past,” Mamajek said in a statement.

The star is puny so it probably didn't impact the cloud too badly, any comets it sent hurtling towards us would probably take another few hundred thousand years to hit us.

Because of how dim it is, it was likely invisible to the human eye most of the time, but because it is magnetically active it flares up occasionally, meaning our ancient ancestors might have been able to see it for a few minutes or hours in the night sky.