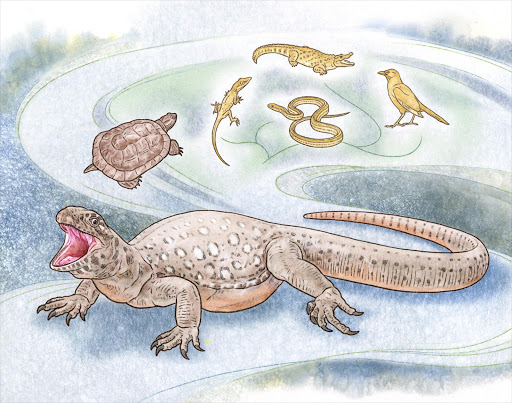 The evolution of turtles has long fascinated scientists - and now a 260 million-year-old fossil found in the Karoo is providing them with a clearer picture of how they evolved.

Eunotosaurusafricanus, is the earliest known branch in the Turtle tree of life - and has previously given researchers insights into how the turtle got its shell.

Now it has revealed some of the secrets of the evolution of the turtle's skull, according to new research published in the journal Nature.

“Using imaging technology gave us the opportunity to take the first look inside the skull of Eunotosaurus. What we found not only illuminates the close relationship of Eunotosaurus to turtles, but also how turtles are related to other modern reptiles,” Dr Gaberiel Bever an Honorary Research Associate at Wits University’s Evolutionary Studies Institute (ESI) and scientist at the New York Institute of Technology said in a statement.

So what has the skull revealed?

The Eunotosaurus' skull is diapsid, which means it has a pair of openings just behind its eyes that allow its jaw muscles to flex as it chews - something it has in common with lizards, snakes, crocodilians and birds - but not with modern turtles.

Modern turtle skulls are anapsid, or fused with bone - and thus their bite is a lot slower than that of their ancestors.

Now what makes this important in terms of evolution is that the anapsid-diapsid distinction was used for years to argue that modern turtles were from an ancient lineage - and not closely related to modern lizards, crocodiles and birds who have a diapsid ability.

"The new data from Eunotosaurus rejects this hypothesis," according to a statement from Wits.

“We can now draw the well-supported and satisfying conclusion that Eunotosaurus is the diapsid turtle,” said Bever.