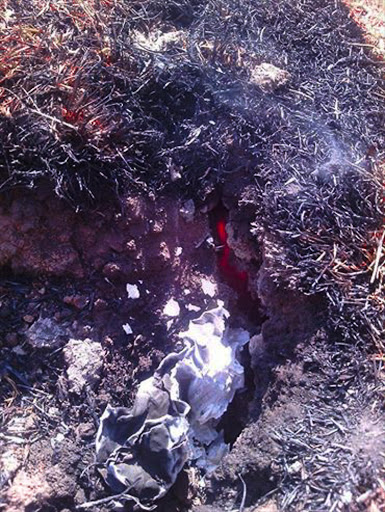 Scientists from the Council for Geoscience are on their way to Limpopo to investigate the mysterious appearance of a lava-like fire which has injured three people after burning unabated for three weeks at Zaaiplaas Village in Sehlakwane.

In July the Limpopo Provincial Disaster Management Centre (PDMC) received a call from the Sekhukune District Municipality regarding the emergence of unusual fire, mud and grey ash in a damp wetland area on the outskirts of the village.

“The PDMC visited the area to conduct rapid assessment. The assessment revealed that the smoke and fires started three weeks ago. There is hot mud and grey ash in the area and three people were burnt by hot ash,” said PDMC spokesperson Michael Moja.

The fire has steadily burnt through an area larger than a rugby field, transforming the wetland into what looks like an active volcanic field.  A community member, Mbusi Ka-Mphezulu, posted photos on Facebook of a lava-like substance glowing from underneath the ground.

“While we were doing ANC work this is what we saw, the ground is on fire. It is like a volcano. People of Sehlakwane please take note of this unusual stuff,” said Ka-Mphezulu.

Moja said that the PDMC has been unable to determine the cause of the strange occurrence.

“We have never experienced something like this in the province and are unsure of what the cause is. In this case, the matter must be referred to the Council for Geoscience for investigation, through the assistance of the National Disaster Management Centre,” Moja explained.

Unusual seismic activity, tree roots burning underground or the ongoing drought conditions, which have dried out the wetland, have all been pointed at as a possible source of the strange phenomenom.

A team from the Council for Geoscience will visit the site on Friday. Seismology unit manager Michelle Grobelaar would not comment on the various theories about the cause of the fire until a thorough assessment had been conducted.

“We would rather answer questions once we have a better understanding of the situation. We should have some answers by early next week,” said Grobelaar.