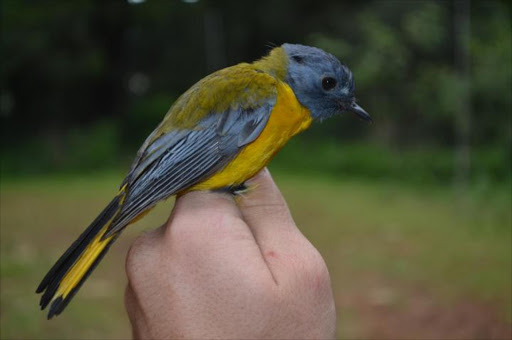 One of the species hit by the loss of indigenous forests in the Eastern Cape is the white-starred robin. This bird was ringed by Stellenbosch University researchers in the Transkei Mistbelt forests.
Image: Jake Mulvaney

They say the early bird catches the worm‚ but what if there are no birds… or worms?

Birds are vanishing from indigenous forests‚ especially in the Eastern Cape‚ and mopane worms — a key part of life in Limpopo — are in significant decline.

Separate academic studies have revealed the new threats to biodiversity caused by environmental changes and loss of habitat.

A team from Stellenbosch University and the Department of Environmental Affairs‚ which analysed 25 years of citizen science data collected by the Southern African Bird Atlas Project‚ found that half the country’s 57 forest-dwelling bird species are vanishing.

Stellenbosch behavioural ecologist Michael Cherry said indigenous forests in the former homelands of the Ciskei and Transkei were the main worry.

Indigenous forests make up less than 1% of South Africa's landscape but are home to 14% of its terrestrial birds‚ many of which are endemic or range-restricted. These forest patches are highly fragmented‚ with most remaining forests being smaller than one square kilometre. Photo: Jessica Leaver

“Some bird species have disappeared from these forests. But we do not know whether this implies a decline in population or whether they are simply moving somewhere else‚” he said.

Nearby plantations of pines and gums were a threat to some birds. “They build nests in the understorey of indigenous forest‚ which is vulnerable to trampling if cattle are allowed to graze there‚” he said.

The study‚ published in Bird Conservation International‚ said indigenous forests make up less than 1% of South Africa’s landscape but are home to some 14% of terrestrial birds.

Further studies led by Cherry‚ including experts from Harvard in the US‚ was looking at the threat to other animals as well as birds.

“If birds — perhaps the most mobile of animals — are being negatively affected by forest degradation‚ then other animal species are likely to be worse affected‚” he said.

The Limpopo study‚ by University of Cape Town master’s student James Sekonya‚ found that mopane worms are in decline in communities where they are an important food source‚ a trading commodity and an intrinsic part of cultural practices.

“Household consumption and trade patterns were altered as a result of the weather and climatic conditions shock arising from the El Niño phenomenon‚” said Sekonya.