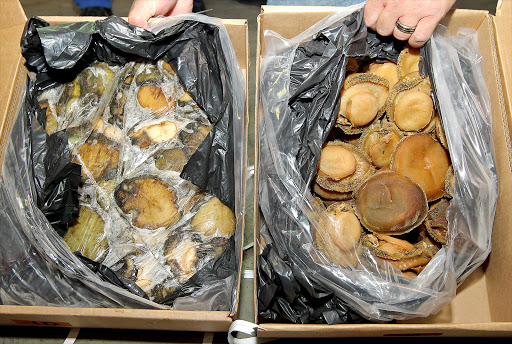 Abalone worth R30-million was sezied from a 40ft shipping container in Table Bay Harbour.
Image: SAPS

Abalone worth R38-million was seized on Friday in what Western Cape police called a “major blow” to illegal trade in the threatened shellfish.

Two seizures — at a cold storage warehouse in Paarden Island and a 40-foot shipping container in Table Bay Harbour — brought police “a step closer to breaking the back of a syndicate responsible for the export of our marine resource”‚ said police spokesman Lieutenant-Colonel Andrè Traut.

The investigation that led to Friday’s raids began a week earlier with the arrest of four suspects at two warehouses‚ said Traut.

“Detectives conducted an operation (on Friday) morning at a cold storage in Paarden Island where they came across a huge shipment of dried and frozen abalone with an estimated value of R8-million‚” he said.

“Further investigation was conducted which led investigators to Table Bay Harbour where they discovered a 40-foot container filled with dried and frozen abalone‚ packed in boxes and destined for export. With the assistance of the Department of Agriculture‚ Forestry and Fisheries the container and contents were seized. The value of the shipment is estimated at R30-million.

“Although no arrests in connection with the seizure have been made as yet ... our investigation into the circumstances is far from over.”