Free water from thin air? US scientists turn on the tap 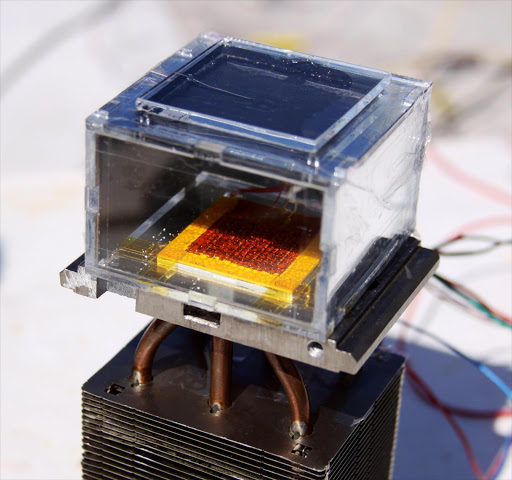 This is the water harvester built at MIT with MOFs from UC Berkeley. Using only sunlight, the harvester can pull liters of water from low-humidity air over a 12-hour period.
Image: MIT photo from laboratory of Evelyn Wang.

To drought-hit areas of South Africa it sounds like the holy grail: a device that extracts water from air using only the power of the sun.

But scientists in the US have proved it can be done‚ even when humidity is as low as 20% — a level common in arid areas.

Their prototype “water harvester” extracted 2.8 litres of water from air in 12 hours‚ the scientists reported in the journal Science this week.

“This is a major breakthrough in the long-standing challenge of harvesting water from the air at low humidity‚” said Omar Yaghi‚ one of two senior authors of the paper.

“There is no other way to do that right now‚ except by using extra energy. Your electric dehumidifier at home ‘produces’ very expensive water.”

Yaghi’s prototype uses a material he invented 20 years ago‚ a metal-organic framework (MOF)‚ which combines metals such as magnesium or aluminium with organic molecules to create rigid‚ porous structures ideal for storing gases and liquids.

In 2014‚ Yaghi and his team at the University of California‚ Berkeley‚ synthesised an MOF from zirconium metal and adipic acid that binds water vapour. He suggested to Evelyn Wang‚ a mechanical engineer at the Massachusetts Institute of Technology‚ that they join forces to turn it into a water-collecting system.

The system Wang and her students designed consisted of more than 1kg of dust-sized MOF crystals compressed between a solar absorber and a condenser plate‚ placed inside a chamber open to the air.

As ambient air diffuses through the porous MOF‚ water molecules attach to the interior surfaces. Sunlight heats the MOF and drives the water towards the condenser. The vapour condenses and drips into a collector.

“One vision for the future is to have water off-grid‚ where you have a device at home running on ambient solar for delivering water that satisfies the needs of a household‚” said Yaghi. “To me‚ that will be made possible because of this experiment. I call it personalised water.”