Two Cape Vultures meet - it's a match made in heaven 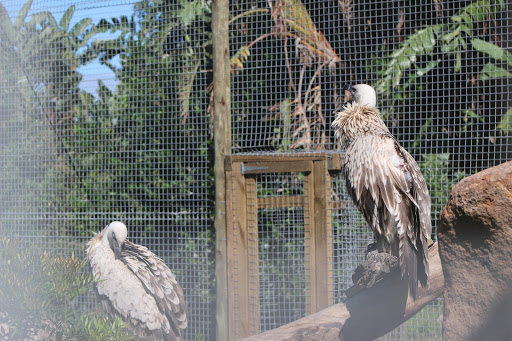 Two Cape Vultures meet - it's a match made in heaven.
Image: SUPPLIED

Cape vultures Horace and Cites may not by love birds‚ but they are a match made in heaven.

That's after Horace‚ a lonely Cape vulture‚ the first member of the Crocworld Conservation Centre’s conservation and breeding Vulture Programme‚ was recently introduced to the young Cites‚ a juvenile Cape vulture who was rescued in the Oribi Gorge area in February‚ after colliding with a power line.

She was so badly injured that her left wing had to be amputated.

Cape vultures are only found in southern Africa and are on the International Union for the Conservation of Nature Red List as an endangered species. The species is declining rapidly because of the threat of power lines‚ poisoning‚ destruction of habitat and use in traditional practices.

The fact that Cites has only one wing makes her a perfect mate for sub-adult Horace‚ said Martin Rodrigues‚ general manager of the Crocworld Conservation Centre at Scottburgh on the KwaZulu-Natal south coast.

“His story is similar to hers‚ he flew into a power line and had to have his wing amputated; but in his case it was the right wing.

“They are two halves who together make a whole bird. It’s a match made in heaven.”

Crocworld is working with the Raptor Rescue Rehabilitation Centre in Pietermaritzburg to get the breeding programme off the ground.

The centre rescues‚ rehabilitates and releases injured‚ ill and distressed birds of prey but is unable to keep birds on a permanent basis. “That’s where we come in‚” said Rodrigues. “We have built an enclosure to house vultures that‚ for whatever reason‚ can never be released.

“These birds would otherwise be put down. We are giving them a chance at life and in doing so giving them the opportunity to mate and contribute to saving their species.”

All offspring from the programme will be released back into the wild.

There was not a single hitch in the introduction between the two young vultures.

“Vultures are very social and with her being so young – she is not even a year old - we didn’t need a formal introduction‚” said Rodrigues.

“She is at an impressionable age and happy to be with someone. Horace took her under his remaining wing‚ as it were.”

Crocworld’s vulture breeding programme has space for six vultures. The third to join the programme will be a blind African white-backed vulture.

But don’t expect public viewings of the vultures feeding in the near future. Rodrigues said the bird enclosure was being kept out of the path of the public for now.

“We are doing this for the birds. It is something we take seriously and we are proud to be involved in. We want this to be a long standing‚ successful programme.”