One rhino is being slaughtered every 33 hours in KZN 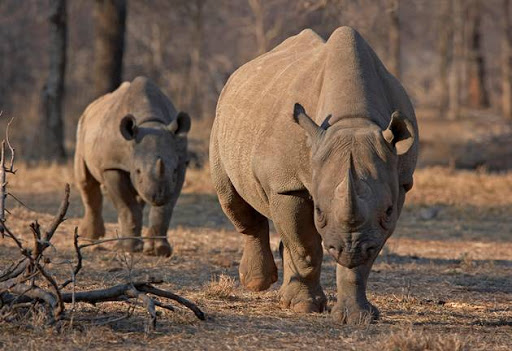 An endangered east African black rhinoceros and her calf walk in Tanzania's Serengeti park in this file photo taken May 21, 2010. A permit to hunt a black rhino in Namibia sold for $350,000 at an auction in Dallas on Saturday with proceeds going to protect the endangered animals despite protests from animal rights groups that saw the sale as immoral conservation.
Image: STAFF

Poachers are now slaughtering one rhino every 33 hours in KwaZulu-Natal‚ most of them in the flagship Hluhluwe-Imfolozi Park where Africa's white rhinos were rescued from extinction just over a century ago.

On Tuesday‚ Ezemvelo KZN Wildlife rangers tracked down two men‚ their clothing splattered in fresh rhino blood‚ as they fled from the park. Their suspicious behaviour and appearance soon came to the attention of local community members in the neighbouring Nkangala area‚ who quickly alerted members of Ezemvelo's anti-poaching units.

The provincial wildlife agency's spokesman‚ Musa Mntambo‚ said the early morning tip-off led to the arrest of both men about 2km from the park's boundary fence.

Matt Meyer will be cycling along the US west coast for two months with a life-size rhino replica in tow.His journey with Lunar started on April 17 in ...
News
4 years ago

"The clothes worn by these two men were soaked in blood. They immediately admitted to poaching a rhino and voluntarily led the anti-poaching unit to where they had hidden the horn‚" he said.

Mntambo said investigators and sniffer dogs were now searching for the weapon and horn-cutting tools used in the killing.

Yet‚ despite the arrests of these - and other - suspected killers‚ the rhino death toll in KZN has risen sharply to 119 for this year alone - translating into an average killing rate of one rhino every 33 hours. By comparison‚ 162 rhinos were killed throughout last year‚ and 116 during 2015 - when the killing rate was one animal every 75 hours. Back in 2008‚ when only 18 were poached‚ the killing rate was one every 486 hours.

Earlier this week‚ anti-poaching units arrested another poacher in the Makhamisa section of the park.

Shortly after 1am on Monday gunshots were heard and when armed rangers followed the source of this sound‚ they came under fire from a group of poachers.

Rhino horns worth R4.99 million intercepted at OR Tambo

Mntambo said the shots narrowly missed the Ezemvelo staff‚ who immediately returned fire‚ wounding one of the poachers. This suspect was arrested‚ but his two accomplices fled into the night‚ leaving behind a .375 rifle‚ a silencer and 14 rounds of ammunition.

Ezemvelo CEO‚ Dr Mabunda has congratulated the Anti Poaching Unit members for the latest arrests and for putting their lives on the line.

He also thanked local communities for information that had "contributed immensely in our fight against this onslaught". He said 80 suspected rhino poachers had been arrested this year.