Should rangers be allowed to kill poachers on sight? Yes‚ researchers say 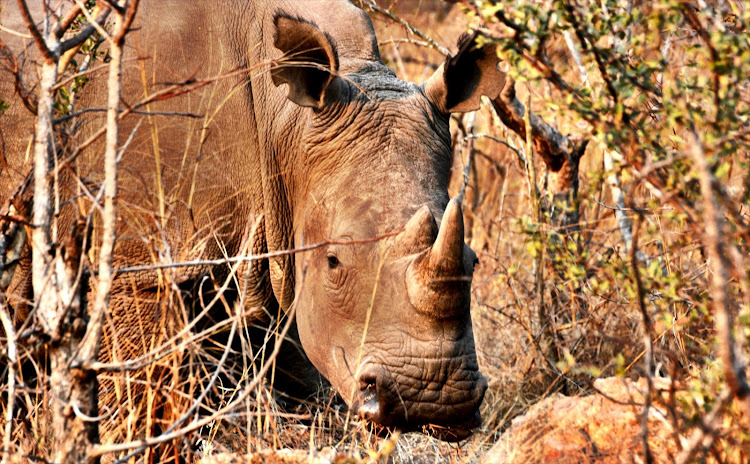 Researchers argue that South Africa should adopt a 'shoot-to-kill' policy to show that it is serious about halting the country’s rhino poaching crisis. File photo.
Image: Reuben Goldberg

South Africa should adopt a “shoot-to-kill” policy to show that it is serious about halting the country’s rhino poaching crisis.

This is the controversial view of two University of Botswana academics‚ who raised a storm by urging South Africa to adopt the highly controversial policy.

Writing in the latest issue of the SA Crime Quarterly journal‚ Goemeone Mogomotsi and Patricia Madigele argue that the policy‚ adopted in Botswana in 2013‚ was a “legitimate conservation strategy” and “a necessary evil” to protect rhinos from extinction.

Police have arrested three suspected rhino poachers in what they called an intelligence-driven operation in Hluhluwe in KwaZulu-Natal.
News
4 years ago

Mogomotsi is a legal officer in the University of Botswana’s department of legal services‚ while Madigele is a resource economics scholar at the university’s Okavango Research Institute.

They argue that the policy has reduced poaching levels in Botswana by sending out a message that if anyone wanted to poach in South Africa’s northern neighbour‚ it was possible that “you may not go back to your country alive”.

“We believe parks are war zones and that rules and principles of war ought to be implemented‚” they argue in the journal’s special issue on environmental crime‚ published jointly by the Institute for Security Studies and the Centre of Criminology at the University of Cape Town.

Guest editor Annette Hübschle makes it clear that the journal’s publication of the shoot-to-kill proposal was not in any way an endorsement of the policy and also suggests it would not be allowed under South Africa’s constitution. Hübschle and journal editor Andrew Faull also comment that South Africa and many of its neighbours are constitutional democracies that had abolished the death penalty.

“Introducing ‘shoot-to-kill’ may catapult us back to the dark days of apartheid and colonialism where the rule of law and fair process were applied selectively; ‘shoot-to-kill’ policies target the lowest tiers of organised crime networks while the upper echelons remain untouchable‚” they said.

Mogomotsi and Madigele‚ however‚ contend that Section 49 of South Africa’s Criminal Procedure Act allowed police and other arresting authorities to use “lethal force” or “reasonably deadly force”.

Former Ezemvelo KZN Wildlife rhino protector Lawrence Munro is recovering in a Johannesburg hospital after he was gored by a black rhino while ...
News
4 years ago

“It is hence our view that South Africa’s legislative framework allows for anti-poaching forces to be empowered to shoot at poachers if it is in the interests of their safety and the security of the endangered species. To the moralists‚ such a position is very difficult to accept; however we argue that it is a necessary evil‚ considering the obligation to protect rhinos from extinction. It appears poachers will do anything to ensure that they kill these animals‚ unless they are made aware of the possibility of their own death in the process.”

They also note that Africa’s elephant population had declined by as much as 50% from 1970 to the early 2000s‚ while the continent’s black rhino population had plummeted by 67% from 1960 to the early 2000s. They also state that Zimbabwe’s elephant population increased from 52 000 to 72 000 animals after that country adopted a shoot-to-kill policy in the later 1980s‚ adding that shoot-to-kill was “the only anti-poaching method that clearly signals that wild animals deserve to live”.

They argue that there is a real risk of rhinos becoming virtually extinct in several parts of Africa and that South Africa “seems unable to deal with sophisticated criminals‚ including poachers and wildlife trackers”.

“In light of the above‚ South Africa is encouraged to seriously consider the adoption and implementation of Botswana’s ‘shoot-to-kill’ policy. We believe that Botswana has demonstrated that its policies … deter poachers in general and rhino poachers in particular.”

A spokesman for Environmental Affairs Minister Edna Molewa has not responded so far to requests for comment on the controversial proposal.

However‚ senior SA National Parks rhino special projects leader Major General Johan Jooste has made it clear that he does not support such measures.

Half a ton of rhino horn for sale

The world's biggest rhino breeder has announced plans to sell part of his massive stockpile of horns in a global online auction, sparking concern ...
News
5 years ago

In a separate interview in SA Crime Quarterly‚ Jooste said legal officials met rangers on a regular basis to train them on the legal rules of engagement with armed poachers.

“They drill it into them that you cannot take the law into your own hands because it is not nice to see a fatality‚ nobody likes to see that. And‚ by the way‚ we don’t support shoot-to-kill‚ it will not solve the problem. It will only demean and degrade who and what we are.

“We get really emotional people who respond to the barbarity of poaching depicted in a photo‚ by saying ‘shoot them’. But we as law-abiding citizens have never given consent (to such acts)‚ no matter how angry we were.”

Jooste also told Hübschle there was no evidence that killing poachers would solve the problem.

“I have never seen (an example) where (killing poachers) helps. It is misleading when one is protecting some rhinos very well to say it’s because of ‘shoot-to-kill’.”

Jooste said he believed that law enforcement alone would not solve the horn-poaching crisis‚ though anti-poaching teams were obliged to “buy time” for now‚ while other solutions were sought at a global and regional level.

“We all wish that rhino poachers were gone so that we don’t have to live like we live. I was in Kruger (recently); we’re asking impossible things of people. The stress and emotional strain that this so-called war causes are not things we should extend one more day than is necessary.”