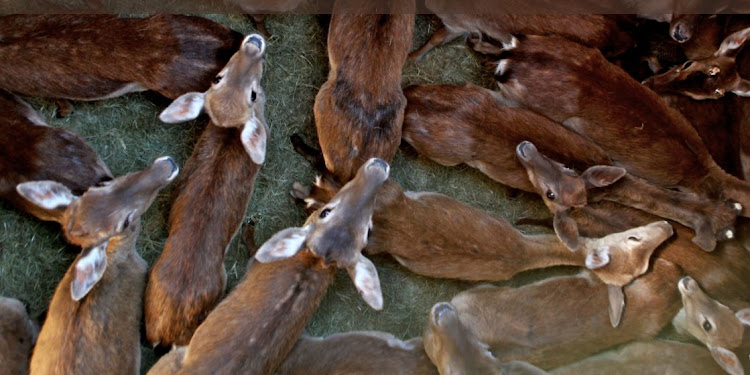 The Robben Island Museum won’t accept any offers to relocate nearly 400 fallow deer‚ that are due to be culled‚ from the island to a sanctuary on the mainland.

At least two offers exist from “potential adoptees” with farms in Caledon and the Cederberg in the Western Cape‚ to house the animals after a culling operation to reduce the number of the alien species at the heritage site began this month.

Robben Island calls in the deer hunter to cull 400 animals

Venison will be on the menu on Robben Island during a nine-month cull of its fallow deer.
News
4 years ago

Medical doctor Francois Greeff‚ who believed it was unfair to kill the animals “just because they are an exotic species”‚ said he had approximately 1‚000 hectares of land in the Cedeberg with enough vegetation and water to sustain the animals‚ which he had offered to RIM.

“I can recognise the sense in not allowing them to roam around the wild and possibly bastardise our indigenous antelope‚ but just to shoot [them] seems bloodthirsty to me‚” he said.

But RIM spokesperson Bongiwe Nzeku said that relocating alien and invasive species was “not within the spirit of the National Environmental Management Biodiversity Act”‚ despite a public outcry over culling the deer and opposition from various animal rights groups.

“Plastic ingestions have also complicated any possibility of the deer being relocated‚” Nzeku said.

“Such an option is not only disruptive to endangered wildlife and un-targeted species‚ [but] it will be inhumane to the deer in the light of confirmed plastic ingestion information.”

Exotic goats back on Table Mountain

Three fallow deer were first introduced to the island in 1963 with other animal species‚ to supplement food requirements for the Island's residents.

The herd of deer has since grown to 450 and for a second time a professional hunter has been brought in to reduce the number - this time to 50. So far 17 animals have been killed with the meat distributed to residents and correctional services.

Cicely Blumberg‚ founder of the Deer Rescue Alliance‚ a public interest group seeking an urgent interdict to prevent further culling on the island‚ said they would “do everything in our power” to have the deer moved to a place of safety.

“We are seeking a court interdict to prevent further killing of the animals‚” said Blumberg.

“We want to relocate them off the island and send them to a sanctuary where they can live out their lives in peace.”