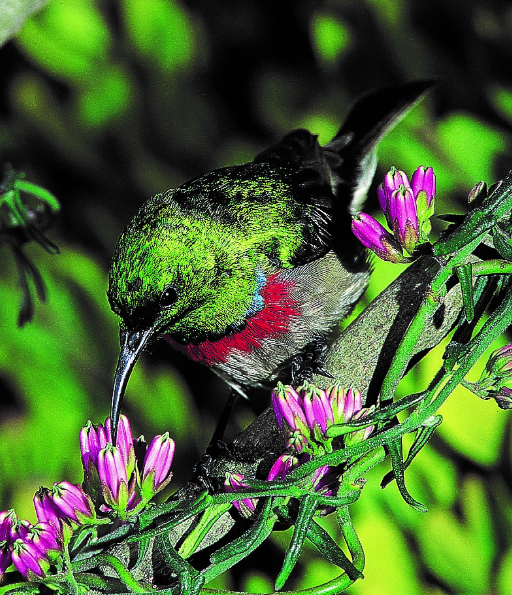 A double-collared sunbird tops up on energy supplies at one of the new 'nectar filling stations' planted in Cape Town.
Image: ANTON PAUW

All birds need a bit of juice to keep their wings flapping - just as we have to fill our cars with petrol to get from A to B.

Known as the Iingcungcu Project‚ the aim is to plant several fynbos gardens at schools across the Cape Flats that will act as “filling stations”‚ thereby providing a new movement link for pollinator species between the Table Mountain National Park and the Boland Mountains.

Iingcungcu is a Xhosa word that means “long-billed birds”‚ or “royalty”.

The project‚ a joint initiative of Stellenbosch University‚ the Cape Peninsula University of Technology and the City of Cape Town‚ is part of an ambitious 10-year project to plant indigenous bird-friendly plants at local schools to provide a year-round source of nectar – especially in densely-populated urban areas largely devoid of natural food sources.

Over the last three years‚ more than 3,700 plants from 23 carefully selected fynbos species have been planted at four high schools on the Cape Flats. 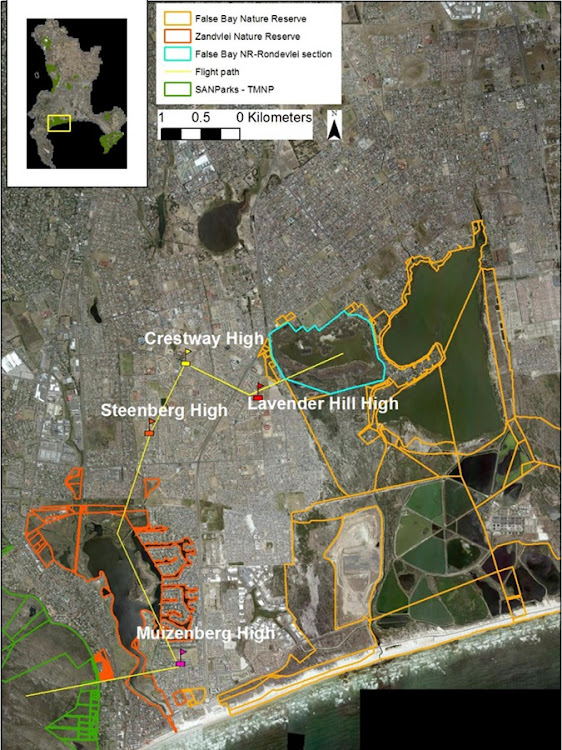 A map showing where the bird filling stations will be. The location of the four high schools where the project is already underway (flags), linked by a hypothetical migration corridor (yellow line) connecting Muizenberg Mountain (bottom left) with Rondevlei Nature Reserve (top right).
Image: SUPPLIED

This week‚ from August 8 - 11‚ the project will expand the corridor by planting bird-pollinated plants on the grounds of Muizenberg‚ Levana‚ Prince George and Steenberg primary schools.

The project was started in 2014 by Bongani Mnisi as an Master of Science project at Stellenbosch University‚ under the supervision of Prof Anton Pauw and Dr Sjirk Geerts.

Prof Pauw says the impetus for the project came from the observation that nectar-feeding birds‚ particularly Malachite sunbirds‚ do not venture far into the urban areas that now surround the Table Mountain National Park and other smaller conservation areas on the Cape Flats.

“This is worrying‚ because nectar-feeding birds need to migrate in search of their shifting nectar resources‚ especially after fires. Such migration might occur within the Cape Peninsula‚ but when large areas of the peninsula are burnt‚ birds may need to migrate across the city.

“In addition‚ populations of rare plants marooned in small conservation areas within the city may never get visited. Rondevlei is one such small urban conservation area that houses many rare plant species. The schools where gardens are now being established bridge the gap between Rondevlei and the nearby Muizenberg Mountain‚ part of the Table Mountain National Park‚” he says. 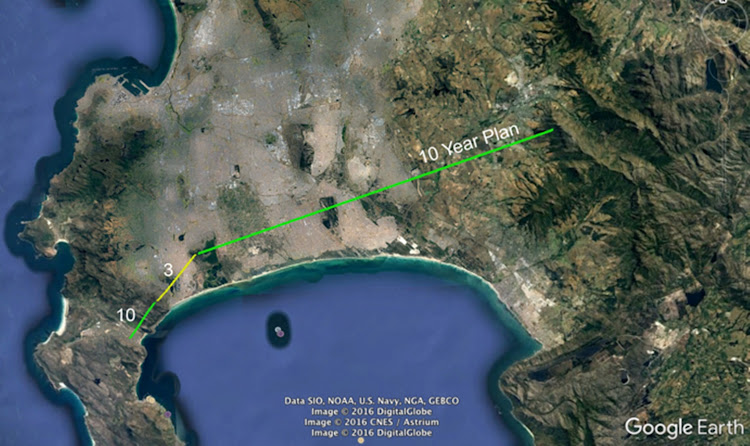 The three-year vision is to establish an ecological corridor for nectar feeding birds from the Silvermine section of the Table Mountain National Park to Rondevlei Nature Reserve. In ten years’ time, the team wants to connect the isolated Table Mountain National Park with the distant Boland Mountains. This means that nectar feeding birds, in particular Cape Sugarbirds, will be able to migrate across the city when large areas of the Peninsula are burnt.
Image: SUPPLIED

A secondary aim of the project is to raise environmental awareness at local schools.

“Activities such as planting‚ nectar measurement and the collection and analysis of bird census data integrate well into the Natural Sciences curriculum and offers the opportunity to teach concepts such as pollination‚ community ecology‚ sexual reproduction and dispersal‚ all without leaving the school grounds‚” Pauw said in a statement.

Mnisi’s thesis‚ completed in 2017‚ reported preliminary evidence of an increase in the abundance of Cape white-eyes and Southern double-collared sunbirds at schools where gardens were planted.

“The project is still in a very early stage and the effects are still small. Malachite sunbirds were seen in the gardens for the first time in 2016. However‚ the effects on learners were more impressive‚ with a significant increase in their knowledge of nature‚” says Mnisi‚ who is now head of nature conservation for the City of Cape Town.

“Our vision for the next 10 years is to grow the corridor right across the Cape Flats to the Stellenbosch Mountains‚” said Pauw.

They say the early bird catches the worm‚ but what if there are no birds… or worms? Birds are vanishing from indigenous forests‚ especially in the ...
News
5 years ago

The Robben Island Museum won’t accept any offers to relocate nearly 400 fallow deer‚ that are due to be culled‚ from the island to a sanctuary on the ...
News
5 years ago

Bullets to save bait: conservation takes aim at wetland poachers