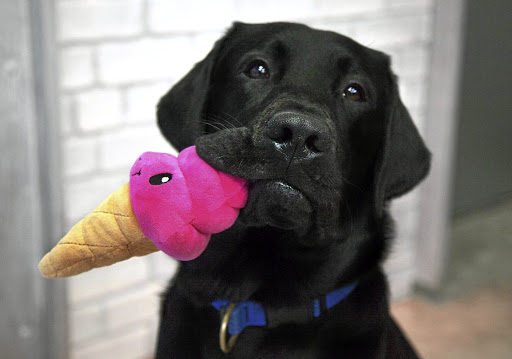 BLAMELESS Labradors and flat-coat retrievers are prone to obesity because of a genetic variation in their DNA, researchers at the University of Cambridge in the UK have discovered Picture:Zach Pagano/Getty Images

Labradors are popular dogs for very good reasons - they are friendly, loyal and easy to train.

But, as most owners soon realise, there is a downside: they are rather too fond of their food and are prone to getting fat.

However, scientists now say that owners should stop blaming themselves if their beloved pet becomes a little portly because "it's all in the genes".

New research carried out by the University of Cambridge in the UK found a genetic variation that researchers believe drives some Labradors to be obsessed by food.

It means that when a dog begs incessantly or starts drooling at the sound of a biscuits bag being opened it could well be because it is "genetically hungry".

The researchers caution against attempts to breed the variation, known as POMC, out of the Labrador gene pool because that would risk losing many of the traits that make the breed so popular.

Published in the journal Cell Metabolism, the study involved analysing the genes of 310 Labradors, combined with weighing them and assessing their "food motivation" using an owner-questionnaire.

The researchers found that nearly a quarter of the dogs carried at least one copy of the POMC gene variant, one of three potentially obesity-related genes being looked for.

For each copy of the gene carried, the dog was found to be on average 1.9kg heavier than the average.

The team said this was notable given the extent to which owners, and not the dogs themselves, control the amount of food and exercise the pets receive.

"This is a common genetic variant in Labradors and it has a significant effect, so it is likely that this helps explain why Labradors are more prone to being overweight in comparison to other breeds," said Eleanor Raffan, who led the research.

"However, it's not a straightforward picture because the variant is even more common among flat-coat retrievers, a breed not previously flagged as being prone to obesity.

She warned that trying to get rid of the mutation could change the personality of the breed.

Giles Yeo, a Cambridge colleague who also worked on the study, said: "Labradors make particularly successful working and pet dogs because they are loyal, intelligent and eager to please but, importantly, they are also relatively easy to train.

"Food is often used as a reward during training and carrying this variant might make dogs more motivated to work for a titbit."

Research is also being undertaken at the University of Liverpool in an effort to design treatments for ligament damage in Labradors, the most common orthopaedic problem encountered by vets.

Being overweight reduces a dog's quality of life and can exacerbate joint disorders.

Scientists are using advanced imaging technology to assess exactly how the breed's knee bones work together and how walking contributes to the risk of ligament injury or rupture.

Future treatments, such as customised knee implants, could be of particular use for overweight dogs.