Scientists try to speed up the internet with quantum computing 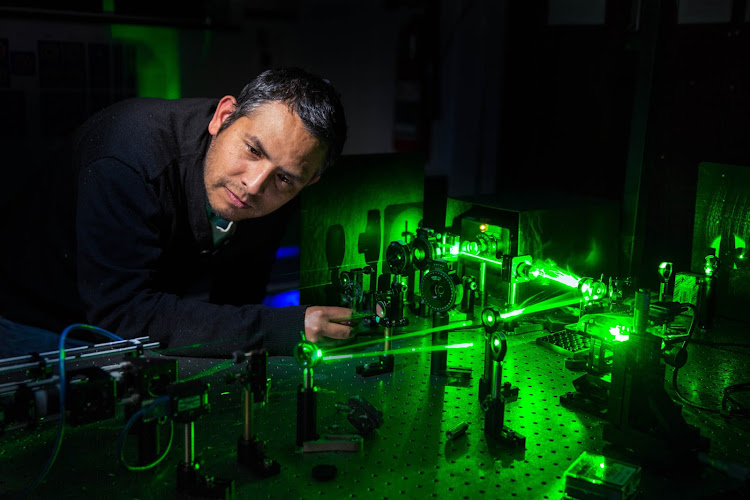 Carmelo Rosales works with a laser in the Structured Light Laboratory at the University of the Witwatersrand in Johannesburg. Rosales, a post doctoral researcher, is working with Andrew Forbes and his team on data communication via laser light. Rosales says that the team can produce light one photon thick that is encrypted and virtually hack-free. The applications for this technology can help poor communities receive cheaper broadband access; can be used in military applications and banks have shown interest in the technology for communicating between branches.
Image: DANIEL BORN for THE TIMES

In about 10 years‚ current encryption techniques used in online banking will be rendered obsolete by quantum computing.

Scientists at Wits University are among global groups that are pioneering the use of quantum computing to create new fundamentally secure ways of sending data‚ using the laws of quantum physics to render codes unbreakable.

Distinguished Professor of Physics Andrew Forbes runs a structured light laboratory at Wits that uses optical light patterns and quantum physics to exponentially improve both the speed and security of the internet.

His team has funding from the state-run Technology Innovation Agency to design a prototype device that will take their experimental workings in the lab and put them in a patentable device for industry to work with by next year.

It is hoped that industry would then take this prototype and spend a few years making it into a smaller‚ simpler consumer device or computer that offers completely secure and speedy internet.

Technology is transforming business at such a rapid pace we can be forgiven for thinking all industries and all players in those industries have ...
Business Times
4 years ago

Forbes states: "All these encryption tricks today are based on complexity. I assume that I am cleverer than you. So long as that is true‚ the security holds. The moment it fails‚ the security fails."

A quantum computer using quantum physics will be able to decipher encryption used today at a much faster rate. Such a computer could be expected within 10 years‚ he said.

The European Union has made 1-billion euros available for scientists to develop quantum technology.

Forbes explained that measuring one object usually means another unrelated object is unaffected.

In the quantum world‚ particles are linked‚ so interacting with one particle distorts the other‚ no matter how far away it is.

Using entangled particles to send data means if someone tries to intercept a message‚ it is fundamentally changed and will destruct.

Forbes said transmitting data with quantum physics principles is "fundamentally secure. The laws of physics make it impossible to crack the code."

What enables him to use these techniques is the use of optical technology and light to send data.

Researchers in Australia have found a new way to build quantum computers which they say would make them dramatically easier and cheaper to produce at ...
News
4 years ago

Forbes and his team are trying to use light patterns to send multiple amounts of data at the same time.

"There are an infinite number of shapes. If you could put information into shapes‚ you could in principle multiply everything you send today by the number of shapes you have. That gives you the potential to make the internet go infinitely faster."

Forbes and many global scientists aim to eventually be able to use 1‚000 light patterns simultaneously to send data‚ thus speeding up the fibre optics internet as we know it by a factor of 1‚000.

The prototype is expected next year and will use up to eight light patterns to speed up internet transmission and will combine quantum physics to enable unbreakable security. It will take a few more years to be simplified into a consumer device.