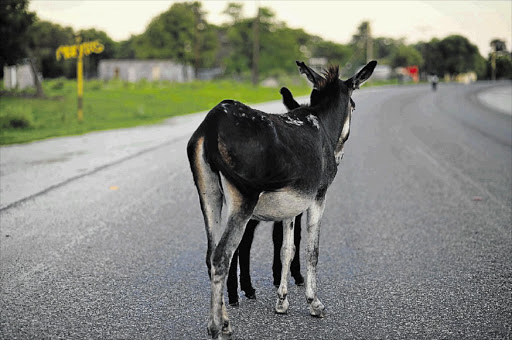 Gelatin extracted from skins is used in a Chinese traditional remedy called ejiao‚ and as its popularity has surged in the past decade the demand for skins has surged to four million annually.
Image: Anton Crone

With donkey skins worth up to R5‚300 each in China‚ abalone smugglers in South Africa are muscling in.

A report in National Geographic by Cape Town journalist Kimon de Greef‚ who is writing a book about abalone poaching‚ links the two wildlife trafficking trades.

De Greef tells of the discovery on a smallholding outside Bloemfontein of 70 donkeys that were too weak to stand after being starved for a week. Behind the house‚ skins were drying in the sun.

SPCA inspector Reinet Meyer said gas burners and huge pots in an outbuilding were being used to process abalone. “We weren’t thinking about abalone poaching in Bloemfontein‚” she told De Greef. “That stuff happens at the coast.”

But according to the National Geographic report‚ “illicit supply chains cross borders and involve diverse products‚ driven by the steep margins of the black market. With demand for donkey skins rising sharply in China‚ wildlife traffickers have begun moving into the trade.”

Gelatin extracted from skins is used in a Chinese traditional remedy called ejiao‚ and as its popularity has surged in the past decade the demand for skins has surged to four million annually. “The result is an unprecedented global trade‚ much of it illicit‚” reports De Greef.

Six African governments banned donkey skin exports last year but smugglers have taken over‚ and cases like the Bloemfontein raid in June 2016 are helping investigators to connect the dots.

De Greef reports: “Dried abalone ... forms the nucleus of a criminal economy worth millions each year in South Africa‚ with documented links to money laundering and the drug trade.

“Further corroboration came in May 2017‚ when officials seized more than 800 donkey skins from a farm outside Johannesburg. Stashed among bales of donkey hides‚ they found seven tiger skins‚ considered a status symbol in China.

“A single export firm ... investigated by police in Johannesburg this year‚ traded more than 15‚000 donkey skins in an eight-month period from July 2016 to May 2017‚ exceeding the entire country’s annual legal limit at the time by some 5‚000 skins.”