The bones reveal all

Evolution: A vault at Wits University contains answers to our past 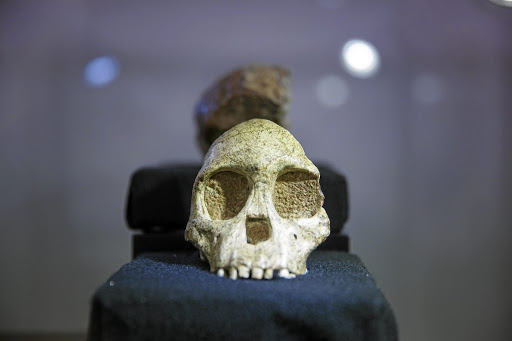 Bernhard Zipfel walks down a short passage. A set of keys jingles at his side. Nonchalantly, he inserts a key into a solid steel door.

"I cannot get enough of this view," he says as the door swings open and we step into a large, dark room. Four smashproof glass cases stand in the centre. Spotlights highlight the treasures they keep. In one of the cases is the skull that changed the world's understanding of human evolution: the Taung Child.

In 1924 Raymond Dart was presented with a chunk of breccia rock embedded with an unusual skull, thought to be that of an extinct primate. The scientist, however, saw in its appearance a species showing features of both humans and apes. This observation led to a new understanding of human evolution.

The evolutionary tree of humankind was previously thought to have originated in Europe or Asia. However, Dart's observations on this small child's skull proved humans were roaming the grasslands of Africa more than 2 million years ago.

The skull is on display alongside hundreds of other fossilised skulls and bones of modern and ancient humans, making this one of the most important collections of our understanding of human evolution.

"We have about 40% of all skeletons of hominins in the world here," says Zipfel, the curator of fossils and rocks at the University of the Witwatersrand, and one of the lead scientists who worked on the discovery and identification of Australopithecus sediba.

The collection of fossils in the Hominin Vault, that also houses Lee Berger's latest finding, Homo naledi, is home to remarkable finds in palaeoanthropology.

"This is Australopithecus sediba, over there is Australopithecus africanus and this one is from East Africa, this is a cast of Lucy," says Zipfel, pointing to each specimen as he identifies it. The latter is a collection of plastic-cast bones with small tags that identify each fragment of the 3.6million-year-old fossil.

Some of the original fossils have disappeared or have been destroyed over time, so the cast collection in the vault is as important as the originals.

"Worldwide, there are only around nine almost complete early hominin skeletons and we have four of them," says Zipfel.

"There have been five major species extinctions in the world, with the last one being when the dinosaurs died out. We are in the midst of the sixth extinction and we are playing a role in this extinction. We are hastening it," says Zipfel.

"We could see drastic changes taking place, with 95% of living things dying out and only a small percentage surviving and then re-evolving into whatever comes next."