Your phone is switching you off‚ say academics 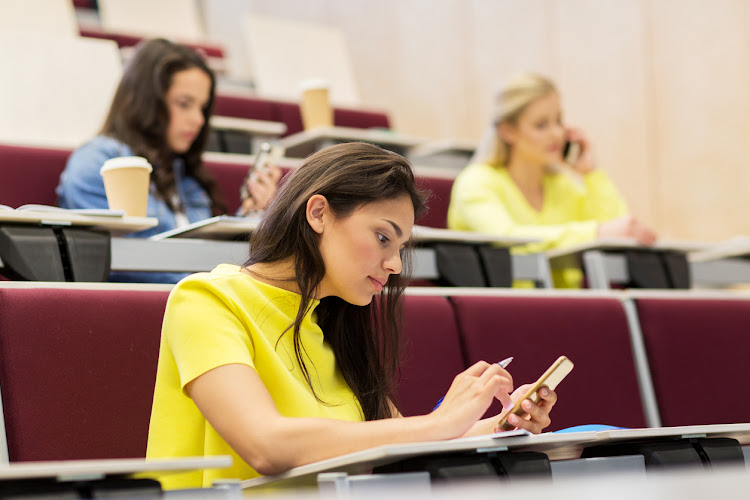 “While ever-smarter digital devices have made many aspects of our lives easier and more efficient‚ a growing body of evidence suggests that‚ by continuously distracting us‚ they are harming our ability to concentrate‚” said researchers.
Image: Gallo Image/iStock

Daniel le Roux and Douglas Parry said students looking at their phones in lectures were hardly ever concentrating on the study topic.

“When students use their phones during lectures they do it to communicate with friends‚ engage in social networks‚ watch YouTube videos or just browse around the web to follow their interests‚” they said on Tuesday.

Smartphone users worldwide spend more than three hours a day on their phones‚ and Le Roux and Parry — from the cognition and technology research group in the information science department — said alongside the advantages there were costs.

“While ever-smarter digital devices have made many aspects of our lives easier and more efficient‚ a growing body of evidence suggests that‚ by continuously distracting us‚ they are harming our ability to concentrate‚” they said.

Lecturers were encouraged to use technology such as video‚ podcasts and Facebook in their teaching‚ as a result of which smartphone and laptop use during lectures had become the norm.

“Studies by ourselves and researchers across the world show that students constantly use their phones when they are in class‚” they said. “But here’s the kicker: if you think they are following the lecture slides or engaging in debates about the topic you are mistaken. In fact‚ this is hardly ever the case.”

The researchers said there were two reasons this was problematic from a cognitive control and learning perspective.

“The first is that when we engage in multitasking our performance on the primary task suffers. Making sense of lecture content is very difficult when you switch attention to your phone every five minutes.

“A strong body of evidence supports this‚ showing that media use during lectures is associated with lower academic performance. “The second reason is that it harms students’ ability to concentrate on any particular thing for an extended period of time. They become accustomed to switching to alternative streams of stimuli at increasingly short intervals.

“The moment the lecture fails to engage or becomes difficult to follow‚ the phones come out.”

Awareness of this trend had prompted some lecturers‚ even at tech-oriented universities such as the Massachusetts Institute of Technology in the US‚ to declare lectures device-free.

“No one can deny that mobile computing devices make our lives easier and more fun in a myriad of ways. But in the face of all the connectedness and entertainment they offer‚ we should be mindful of the costs‚” said Le Roux‚ head of the research group‚ and PhD student Parry.