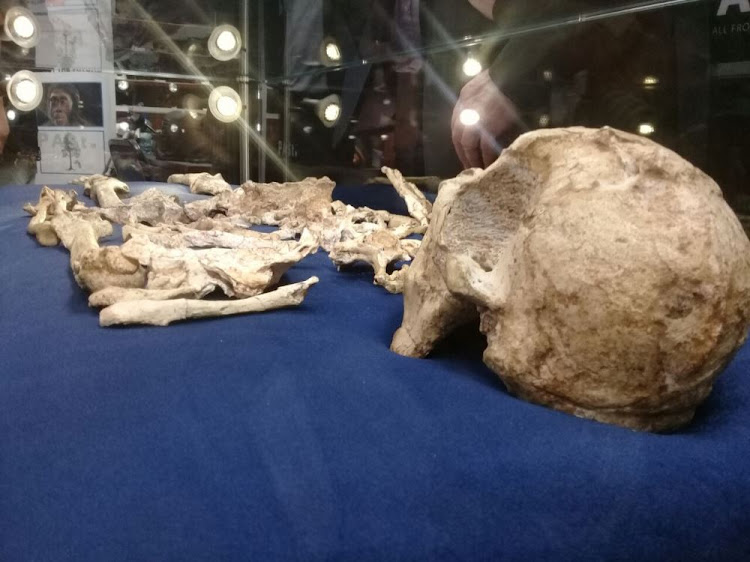 Unveiling of the skeleton of Little Foot at the University of Witwatersrand.
Image: Naledi Shange

After over 20 years of trying to carefully extricate the remains of a virtually complete fossil of human ancestry from cement-tough rocks‚ Professor Ron Clarke compared the process to "trying to remove pie with a flaky pastry out of the concrete".

“As has been said‚ she is the most complete Australopithecus skeleton ever discovered from anywhere‚” said Clarke‚ during the unveiling. The bones of Little Foot are believed to be around 3.5 million years old. She was believed to have been a female‚ was around 1.3m high and had walked upright. She had features similar to the human‚ having legs which are longer than the arms‚ unlike the ape‚ said Clarke.

The few missing pieces of her skeleton were believed to have possibly been taken as souvenirs by tourists who visited the Sterkfontein caves prior to it being illegal to remove items from there.

The University of Witwatersrand is now home to one of the world’s oldest and virtually most complete fossil of human ancestry‚ known as Little Foot.
News
3 years ago

“[Others could have been] washed down to a lower level in the cave‚” Clarke added.

While the bones of hyenas and leopards were discovered in the same caves Little Foot was found buried in‚ to date‚ she is the only human-like fossil to be found there.

Conceding that this was the greatest find of his career‚ Clarke was proud as he removed the cloth which had covered the glass casing that held the remains.

"The cloth which is covering it… You will see that it has a trail of footprints on the top and it has some words in Swahili… The cloth is particularly symbolic to me because it is from Kenya which is where I started my career in 1963 and the words are Swahili for “follow the footsteps”.

This was a slogan that was put out by Daniel Arap Moi‚ the President of Kenya who succeeded Jomo Kenyatta. But in my case‚ I have been fortunate to follow in the footsteps of three great pioneers of paleoanthropology and those are Raymond Dart‚ Robert Broom and Louis Leakey‚" Clarke said. He explained how he first came across a book by Dart when he was 16.

"In it‚ I read about Dart's discovery of the Taung Child and of his naming of it and there is the Taung Child‚ the original of it‚ in the case and it was found in 1924‚" Clarke said‚ pointing to the skull a few metres away from him.

"He said it was an ape on the way to becoming man. Now also in that book‚ I came across a different species that he had named called Australopithecus Prometheus and that was named firstly on a specimen from Makapansgat and I little knew at the time that it would be my destiny to eventually find a complete skeleton of that second species that was named by Raymond Dart‚" Clarke said.