Print your own 3D dinosaur skull at home You can now print a 3D skull of a 200 million-year-old dinosaur that once roamed the South African plains at home.

A PhD student from the University of Witwatersrand (Wits) made this possible by researching and performing a CT (Computed Tomography) scan on the dinosaur Massospondylus.

“That’s the good thing with CT scanning‚ you don’t necessarily need to prepare them as much‚ because you can CT scan the rock and you can reconstruct the bones without having to take out the fossil out of it.” 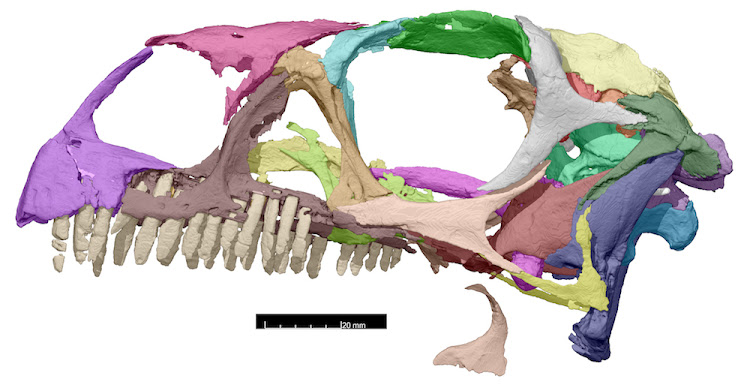 Profile view of the Massospondylus skull after being scanned.
Image: Kimberley Chapelle

Massospondylus was named in 1854 by anatomist Sir Richard Owen. Hundreds of fossils of Massospondylus have been found throughout South Africa‚ ranging in size and age. James Kitching discovered fossil eggs and embryos in the Golden Gate National Park in the eastern Free State in 1976. They were herbivores.

Chapelle started researching Massospondylus as an honours student and conducted most of her field work in the Free State‚ Eastern Cape and Lesotho. She was able to examine tiny features of the brain‚ such as the nerves and the organs of the inner ear. Chapelle said studying the inner ear can show how the Massospondylus moved.

Massospondylus babies weighed less than 100g but grew to be half-tonne adults.

“You can actually see tiny replacement teeth in the bones of the jaws‚ showing us that Massospondylus continuously replaced its teeth‚ like crocodiles do‚ but unlike humans that can only do it once‚” Chapelle said.

“I was amazed when I started digitally reconstructing Massospondylus’s skull and found all these features that had never been described.”

Her research was published on Friday in the open-access academic journal PeerJ‚ where you can view or download the 3D surface file if you want to print the skull at home.

Chapelle is using the CT technology to study additional fossils for her PhD.

“It just goes to show that researchers still have a lot to learn about South Africa’s dinosaurs.”