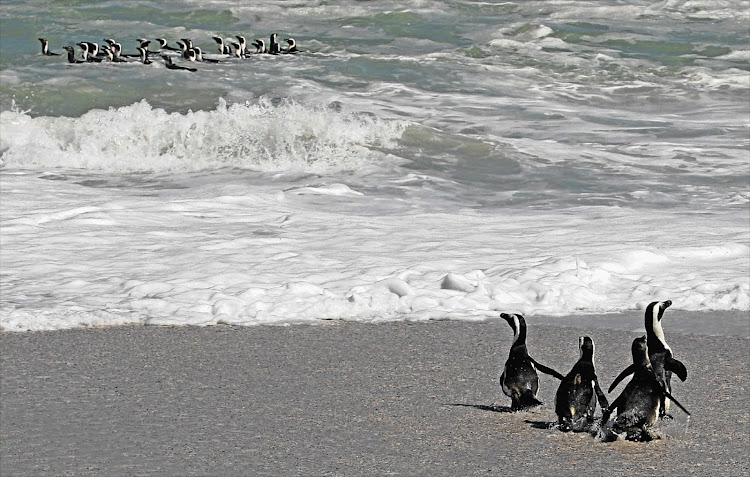 African penguins on the Cape coast could be driven into extinction due to overfishing, marine biologists have warned
Image: NARDUS ENGELBRECHT/GALLO IMAGES

African penguins‚ which are expected to be extinct by 2026 unless their decline is halted‚ can be helped by small no-fishing zones around their colonies‚ say scientists.

Working with the South African government‚ researchers from the universities of Cape Town and Exeter‚ in the UK‚ tested bans on catching “forage fish” such as sardines and anchovies — key prey for the penguins — from 20km around four breeding islands off the Cape.

The body condition and survival of chicks improved when the no-fishing zones were in place. More research is needed‚ but the scientists said the fishing closures should continue.

“The amount of forage fish caught worldwide is increasing and — although the effects are disputed — the impact on marine ecosystems could be severe‚” said Richard Sherley‚ of the Environment and Sustainability Institute at the University of Exeter.

“Forage fish are a key link in the food chain as they eat plankton and are preyed on by numerous species including tuna‚ dolphins‚ whales and penguins.

9 adventures adrenaline junkies can enjoy with their kids

From sea kayaking to skydiving, Claire Keaton rounds up nine activities for thrill-seeking families to add to their bucket lists - one from each ...
Lifestyle
3 years ago

“We need to do more to understand the circumstances in which small no-fishing zones will improve the food available to predators‚ but our research shows this is a promising way to help African penguins.”

The test areas were on a small scale compared to some no-fishing zones worldwide‚ which can cover hundreds of thousands of square kilometres.

Researchers examined colonies at Dassen Island‚ 10km west of Yzerfontein north of Cape Town; Robben Island off Cape Town; St Croix Island‚ home to the world’s largest African penguin colony‚ 4km offshore between the Coega and Sundays River mouths near Port Elizabeth; and Bird Island‚ on the other side of Algoa Bay.

They compared fishing bans of about three years with similar periods when fishing was allowed‚ and said evidence for overall effects was “subtle and inconsistent”‚ with clear benefits for penguin populations at only two of the islands.

Sherley said it was difficult to discover the full effects of the no-fishing zones because many other factors also affect the birds.

“Decades of research may be needed to be absolutely certain of the impact on the penguins’ population size‚” he said.

The researchers used a statistical method called Bayesian inference to demonstrate beyond doubt that the zones improved the health and survival rates of penguin chicks.

“There’s never going to be a quick answer to problems in complex ecosystems‚” said Sherley. “However‚ without conservation action there’s a good chance African penguins will go extinct in at least some of their current colonies.

“We are calling for a precautionary and adaptive approach — no-fishing zones to protect this species‚ with an open mind to change as more evidence emerges.”

Dr Stephen Votier‚ senior author of the study — published in the journal Proceedings of the Royal Society B and entitled “Bayesian inference reveals positive but subtle effects of experimental fishery closures on marine predator demographics” — added: “This is an excellent example of how a collaboration between government‚ fisheries and scientists can lead to positive outcomes for conservation.

“Statistics have played an important role here. Only by using the approach we adopted was it possible to understand fully that these fisheries closures do indeed work.”