Tourists beat it as bumper-biting lions chomp on their car 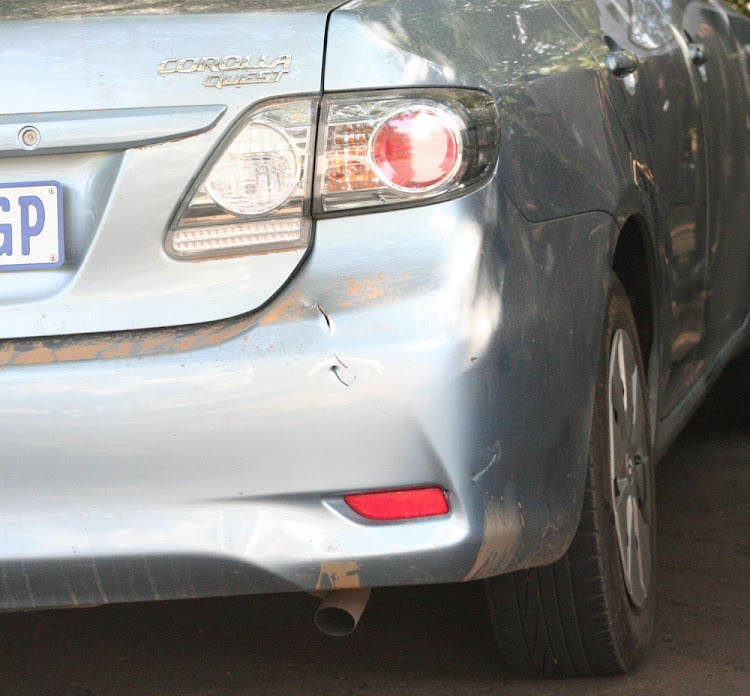 A huge male lion and lioness gave a Dutch couple an experience to remember when the felines chomped on their bumper during a game drive.
Image: Tony Carnie

Two Dutch tourists were rewarded with a lucky sighting of lions lounging about in KwaZulu-Natal’s flagship game reserve on Wednesday. But they had to beat a hasty retreat when the felines thought their car would make a tasty snack.

The couple were mystified and alarmed when their car started moving amid loud crunching sounds which caused them to abandon their early morning game drive and head swiftly from the scene. On reaching the safety of the parking area of the nearest tourist camp in Hluhluwe-iMfolozi Game Reserve‚ they discovered several deep bite marks and scratches on the back fender of their hired Toyota Corolla.

The couple‚ who were not identified by name‚ told staff at the Hilltop camp in the northern KZN reserve that they were delighted to have spotted the animals – a huge male and a lioness – lounging right next to the road early on Wednesday‚ close to the park’s Memorial Gate entrance.

They were just settling down to photograph their Big Five sighting when they noticed the lioness moving towards the back of their vehicle.

“We heard strange noises and could feel something pulling at the back of the car‚ so we drove away quickly‚” they told camp staff‚ adding: “How are we going to explain this to the car hire company?”

"The animals in our parks are not tame and encounters like this underscore the need for all visitors to adhere to guidelines and warning notices when entering a game reserve.

"Because they are wild and unpredictable‚ visitors should always exercise caution and refrain from approaching animals too closely to watch them or to get good photographs."

Mntambo advised visitors to check their surroundings carefully when approaching animals and try to assess the risk of hidden danger. They should also avoid obstructing animal movements and position their vehicles to ensure that they could drive away quickly if necessary. Tourists should never get of their vehicles‚ nor lean out of windows.

"All wild animals‚ especially the Big Five [elephants‚ lions‚ rhino‚ buffalo and leopard] must always be approached with caution‚" he advised.

WATCH | Crazy, funny animal videos that made us laugh and cry in 2017

From snakes in bathrooms to lions attacking cars, 2017 was a busy year in the animal kingdom. We round up some of our favourite animal antics caught ...
News
4 years ago