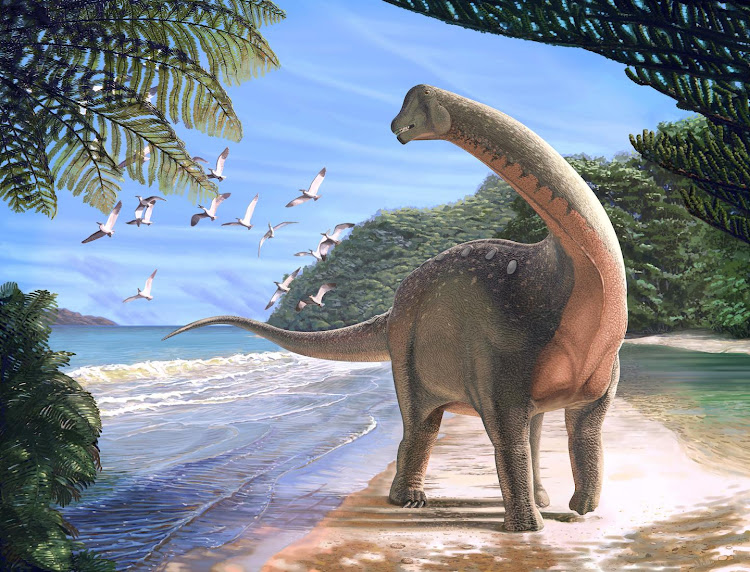 An artists’s impression of the new titanosaurian dinosaur, Mansourasaurus shahinae, on a coastline in what is now the Western Desert of Egypt approximately 80 million years ago.
Image: Andrew McAfee, Carnegie Museum of Natural History

The discovery of the fossilised remains of a new species of dinosaur in the Sahara Desert has been described as a crucial “edge piece” of a largely unfinished palaeontological jigsaw depicting African dinosaurs.

The remains of Mansoursaurus shahinae — a long-necked plant-eater around the size of a school bus‚ with bony plates in its skin — were unearthed in Egypt during a Mansoura University student expedition led by Hesham Sallam.

Eric Gorscak‚ a contributor to the study — published in the journal Nature Ecology and Evolution — said it was a “critical discovery for Egyptian and African palaeontology”. “Africa remains a giant question mark in terms of land-dwelling animals at the end of the age of dinosaurs‚” he said. “Mansourasaurus helps us address long-standing questions about Africa’s fossil record and palaeobiology – what animals were living there‚ and to what other species were these animals most closely related?”

Study co-author Matt Lamanna‚ of Carnegie Museum of Natural History in Pittsburgh‚ US‚ said: “When I first saw the pics of the fossils my jaw hit the floor. This was the holy grail — a well-preserved dinosaur from the end of the age of dinosaurs in Africa — that we palaeontologists had been searching for for a long time.” Sallam and his team have determined that Mansourasaurus was more closely related to dinosaurs from Europe and Asia than those from Southern Africa and South America.

Researchers said the discovery went a long way to uncovering the mystery of Africa’s connection to the land masses of Europe and Asia before the supercontinent of Pangaea split‚ as it showed dinosaurs could move between Africa and Europe towards the end of their time on earth. “Africa’s last dinosaurs weren’t completely isolated‚ contrary to what some have proposed‚” Gorscak said. “There were still connections to Europe.”

Gorscak likened the discovery to finding the “edge piece that you use to help figure out what the picture is”. Sallam said the discovery was an “amazing experience” for his team. “It was thrilling for my students to uncover bone after bone‚ as each new element we recovered helped to reveal who this giant dinosaur was.”

“What’s exciting is that our team is just getting started. Now that we have a team of well-trained vertebrate palaeontologists here in Egypt‚ with easy access to important fossil sites‚ we expect the pace of discovery to accelerate in years to come.”

The course of dinosaur evolution in Africa has remained largely unknown because lush vegetation covers much of the land where fossils may be found.