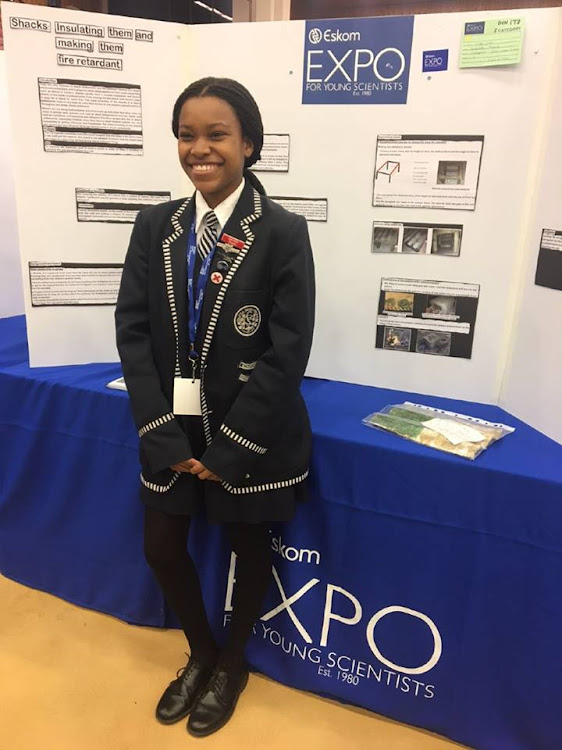 A fire-proof shack that would not go up in flames if a blaze was started inside‚ outside or near it.

This is the groundbreaking invention by Grade 12 pupil Gabriella Mogale of the Collegiate Girls' High School in Port Elizabeth.

“I didn’t think my idea was good enough to enter into the Eskom Expo for Young Scientists‚ but my science teacher convinced me to enter. It didn’t seem compatible with all the other projects. You might not think it’s a great idea but someone else may see something in it‚” Mogale said.

Her invention has already caught the eye of many people who have seen some of the entries at this year’s expo.

The idea behind Mogale’s project was sparked by the 2017 Knysna wildfires‚ which resulted in scores of people‚ including shack dwellers‚ losing their homes and valuables.

“When I saw the Knysna fires‚ I thought ‘why hasn’t someone done something about this because for years‚ informal settlements have been going up in flames’‚” Mogale said.

It took her a month to come up with the concept‚ do the research‚ create a small shack and test if her idea would work.

Her invention‚ which she describes as an improvement of something which already exists‚ is still in the early stages.

It’s all about creating insulation which would create a barrier between the corrugated iron and the inside and outside of the shack‚ she said.

Without giving away too many details on her brainchild‚ Mogale said for this project to work‚ the outside of the shack would be plastered with a “mixture” which contained cement and other products‚ while the inside would be insulated with recyclable goods.

Scores of people were left homeless in Makhaza‚ Khayelitsha‚ on Tuesday after the City of Cape Town’s Anti-Land Invasion Unit tore down homes and ...
News
4 years ago

“This would also insulate the shack from the cold and heat‚” she said.

Asked about expense‚ Mogale said: “It is something that people can make themselves. The outside [which contains the cement mixture] may be a bit costly but it’s still affordable and the inside would contain just recycled material.”

While no housing project has approached her yet to perhaps expand on her idea‚ Mogale said she was convinced that this would improve people’s lives.

“I think we are on to something here‚” she said.

One would think that a brilliant mind such as this would think of venturing into the world of engineering but Mogale has her heart set on something else.

“I want to study actuarial sciences next year‚” she said.

It took donations from Americans‚ Canadians and locals to raise money to buy a decent structure for Olivia Mokete‚ who was assaulted outside Luthuli ...
News
4 years ago

On Monday at around 2am‚ the third fire in less than a year blazed through the informal settlement of Imizamo Yethu in Hout Bay. Around 350 people ...
News
4 years ago

A deathly pall of smoke hung in the air at the Foreman Road informal settlement in Durban on Monday‚ following a devastating fire that claimed the ...
News
4 years ago