WATCH | When there is a cheetah in the back seat 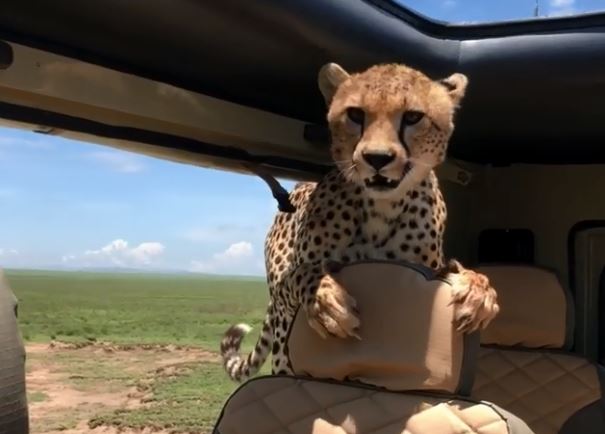 Professional wildlife photographer Peter Heistein had a close encounter of the furred kind when a curious cheetah decided to check out the inside of his game-drive vehicle.

According to Heistein his stepson, Britton Hayes was on his first trip to Africa, and the pair stopped for lunch in the Serengeti National Park to observe a group of three cheetahs.

Generally if you see three cheetahs they're male. Females are generally solitary.

Cheetahs like to jump of high points, like termite mounds, in order to get a good view of the surrounding area.

One cheetah decided that the bonnet looked suitable, while another decided to get into the safari vehicle via the spare tyre.

According to Heistein his stepson credits the experienced safari guide Alex Mnyangabe with keeping the situation calm.

The cheetah eventually left the vehicle to join its brothers to go hunting.

"My thanks to Grand Ruaha Safaris for bringing us to this unique encounter with the wild," Heistein concluded.

Close Encounter Here’s a video clip from my last Safari: The video shows my stepson Britton Hayes who was on his first trip to Africa with his dad.. We had come across several cheetah who were taking a midday break. We stoped for lunch while observing them. After a time they got up and started to move in unison as we were photographing from the road. They moved diagonally across our field of view and as they neared the vehicle the two younger brothers broke off and came towards us. The cheetah makes use of high points such as termite mounds to scan the environment. Apparently we represented a unique scouting platform to them. Before we knew it, one jumped on the hood of the safari vehicle while the other made use of the spare tires out back to get into the rear window. Britt credits our experienced guide Alex Mnyangabe with helping him stay calm and asked me to film him. While Britt was frightened we never felt any threat coming from the cheetah. After a short exploration the three of them moved away to continue their hunt. An amazing experience we will never forget. My thanks to Grand Ruaha Safaris for bringing us to this unique encounter with the wild . . . #ig_shotz #worldshotz #natgeo #Grandruahasafaris #theworldshotz #splendid_animals #wildlifeonearth #wildlifeaddicts #natgeowild #natgeohub #natgeowildlife #africananimals #serengeti #exclusive_wildlife @peterheistein