'Alien' bug in Indonesia has everyone creeped the flip out 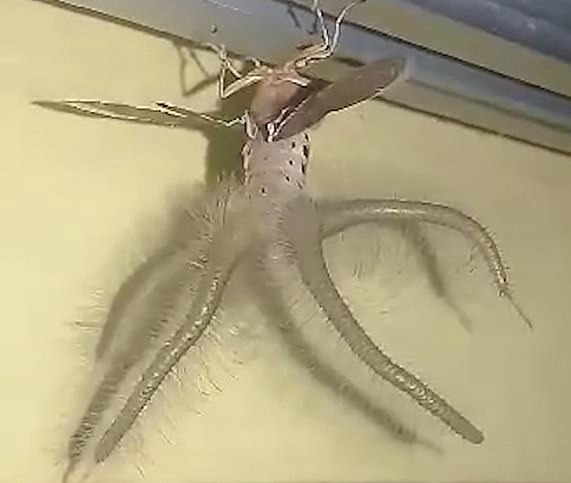 No, it's not an alien. It's a Creatonotos gangis moth -- found only in southeast Asia.
Image: Daily Mail via Twitter

Images of a bizarre "alien-like" winged creature hanging upside down from a ceiling have stunned social media.

According to Daily Mail, homeowner Hari Toae noticed the creature creeping across the ceiling in his Bali home last month.

It had two wings, four tentacles of varying lengths, and appeared as though it was moving upside down with its legs holding on to the ceiling.

The creature was also covered in tiny hairs.

A gangis moth caused a storm on social media in Australia two years ago. It was quickly dubbed 'demon moth'.

Toae said the creature seemed to be looking for a safe place to stay because it had been raining that night. He didn't kick it out.

He said he let it stay in his house, but only for the night because he didn't want it to scare his guests away.

He said he had been unable to identify the winged creature but joked that it "looked like an alien",  adding that it's not something he'd seen before and he didn't think it came from the neighbourhood.

Man is baffled to find a bizarre 'alien-like' winged creature crawling across his ceiling in Indonesia https://t.co/lfoABlYvvp

According to Twitter FBI, the creature is a gangis moth and it's part of a family of the moth family called the arctiidae.

The moth can found in South East Asia and Australia.

But that hasn't stopped peeps from wanting to run a mile, or 10, after seeing it.