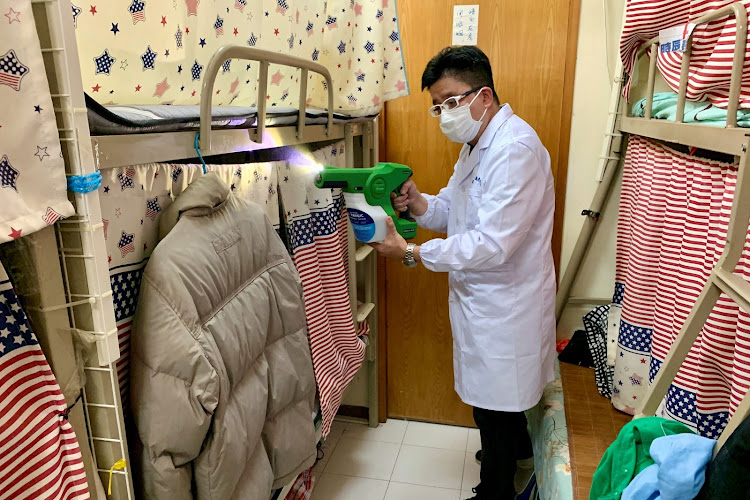 A man demonstrates how to spray MAP-1, an antimicrobial coating that a team of university researchers claimed to be effective in killing virus, bacteria and spore, at a bedspace apartment in Hong Kong, China, on April 21 2020.
Image: REUTERS/Yoyo Chow

Researchers at a Hong Kong university say they have developed an antiviral coating which could provide 90 days of "significant" protection against bacteria and viruses such as the one causing Covid-19.

The coating, called MAP-1, took 10 years to develop and can be sprayed on surfaces that are frequently used by the public, such as elevator buttons and handrails, researchers at the Hong Kong University of Science and Technology (HKUST) say.

"These places are frequently touched, and, at the same time, serve as a very effective medium for transmission of diseases," said HKUST Adjunct Professor Joseph Kwan, one of the chief researchers in the team that developed the product.

The coating that forms after spraying has millions of nano-capsules containing disinfectants, which Kwan says remain effective in killing bacteria, viruses and spores even after the coating has dried.

Unlike common disinfecting methods such as diluted bleach and alcohol, MAP-1 is further boosted by heat-sensitive polymers that encapsulate and release disinfectants upon human contact, Kwan said.

It is non-toxic and safe for skin and the environment, the researchers say.

Following clinical tests this year at a Hong Kong hospital and a home for the elderly, the coating has been made available for commercial purchase by Germagic, a unit of the university's industrial partner, Chiaphua Industries.

The coating was approved for official and mass consumer use in February, and will hit Hong Kong stores next month.

With help from a local charity, the non-toxic coating has already been sprayed around the homes of more than a thousand low-income families in the city.

"I feel like it has strengthened our protection against the virus," said Law Ha-yu, a mother of two who lives in a 110 square foot subdivided unit that was recently sprayed with the coating.

300,000 coronavirus masks sent to pregnant women in Japan may be faulty

Some 300,000 coronavirus masks sent to pregnant women in Japan as part of a government handout have been found to be faulty, media reports said, the ...
News
1 year ago

The researchers said shopping malls, schools and sport training facilities in the city have adopted the coating.

Hong Kong reported no new coronavirus cases for a third day on Tuesday, keeping the total at 1,038 infections and four deaths. This brings some relief as the city grapples with economic ruin triggered by the disease that comes hot on the heels of months of crippling anti-government protests.

Hong Kong leader Carrie Lam said on Tuesday most civil servants will gradually return to work from May 4, but the government had not yet decided whether to ease travel and social distancing restrictions that are due to expire next week.

Makers of household cleaners on Friday took the unusual step of urging people not to drink or inject their products, after U.S. President Donald ...
News
1 year ago