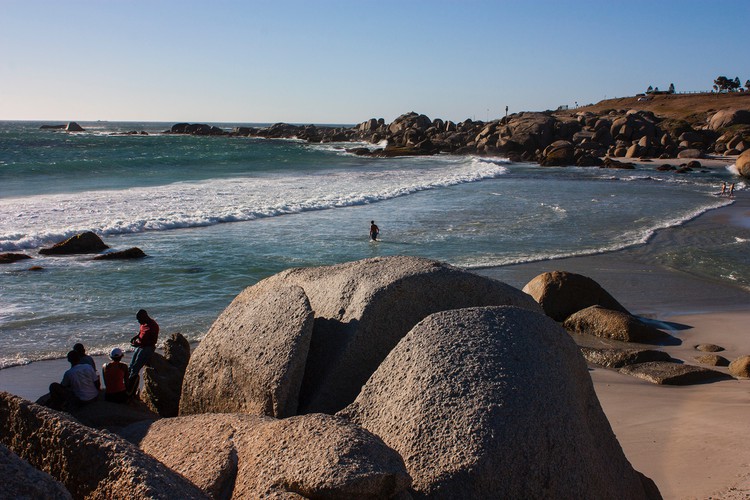 The authors of a new scientific study have found toxic herbicides in the waters of Camps Bay.
Image: GroundUp/Steve Kretzmann

Herbicides banned in other parts of the world have been found in seawater in Camps Bay, and accumulating in seaweed and marine organisms such as mussels, limpets and sea urchins.

A recent study published in the journal Science of the Total Environment reports the presence of five herbicides in samples of seawater, sediment, sand and marine organisms in Camps Bay. The herbicides are atrazine, alachlor, simazine, metolachlor and butachlor.

The samples were taken on September 6 2017, during the height of the drought, which makes it unlikely that the presence of herbicides in the seawater was due to runoff.

The authors of the paper titled “Presence and Risk Assessment of Herbicides in the Marine Environment of Camps Bay” said the marine outfall at Camps Bay – the sewage pipe that extends almost 1.5km out to the middle of the bay at a depth of 28m – is the likely source of herbicides entering the environment. They said “very little storm water was discharged during the study period in 2017 due to the extended drought”.

The sewage pipe discharges about 2.4-million litres of sewage into the bay per day, according to a 2017 report by the Council for Scientific and Industrial Research (CSIR) commissioned by the City of Cape Town.

The only treatment this sewage from Camps Bay and Bantry Bay receives, before being spewed into the bay, is to be pumped through a 3mm grid to remove solids.

The 'plastic pandemic' is much more deadly, say environmentalists

It's Plastic Free July, and that means pondering the sheer volume of its particles that are 'strangling the planet'
Lifestyle
1 year ago

Cape Town’s mayco member for water and waste, Xanthea Limberg, said the city was aware of the study and does not dispute that herbicides were present in the water samples and are accumulating in marine organisms.

However, Limberg said the “constant referral” to the sewage pipe as the primary source of the chemicals “is incorrect and not substantiated by fact, data or science and must be corrected or withdrawn in the scientific literature”.

She said the editors of Science of the Total Environment have been approached and agreed to publish a response, and to request the authors of the study to respond to “a number of key scientific questions”.

Previous studies have shown pharmaceutical compounds have been found in Camps Bay’s waters, and industrial effluents have been found in Granger Bay, near the Green Point marine outfall where more than 27-million litres of sieved sewage is pumped out to sea every day. This new study is the first to identify the existence and bioaccumulation of hazardous herbicides.

Simazine, used to kill weeds and grasses, is banned in the European Union. The mussels tested in this study were found to contain 157.8 nanograms per gram dry weight.

Atrazine, which was also found in the mussels, sea urchins, limpets and seaweed, and simazine are herbicides that appear on the United Kingdom red list of most dangerous substances.

The National Sea Rescue Institute has warned of an increase in great white sharks along the southern Cape and Eastern Cape coastline after one came ...
News
1 year ago

According to information published by Cornell University, the US Environmental Protection Agency (EPA) has set a lifetime health advisory for simazine in drinking water at 1,000 nanograms (1 microgram).

According to the EPA, drinking 1,000 nanograms or less of simazine a day for a lifetime does not pose any health concern. However, consuming more than this amount over a long time has “caused tremors, damage to testes, kidneys, livers and thyroid, as well as disturbance in sperm production and gene mutations in laboratory animals”.

Atrazine has been recognised as an endocrine disrupter, which is a chemical that mimics hormones or interferes in the body’s ability to regulate itself.

Beyond human health, the herbicides entering Camps Bay “represent an ecological threat to this environment” state the authors of the study, which was led by Petrik.

Besides contamination from the marine outfall, they said it is possible the underground aquifer could be contaminated “and this aspect therefore requires further investigation”.

The study notes SA is a signatory to the Stockholm Convention on Persistent Organic Pollutants, which was ratified in May 2004, but “the public health significance of water source pollution by pesticides, particularly herbicides, has attracted little attention from government and regulatory agencies”.

There is a high focus on microbial regulation in SA, but there are “few standards for organic contaminants, and only one standard for a herbicide, atrazine”.

Other studies have shown high levels of chemical pollution in Cape Town’s seas, and in rivers including the Salt River catchment and Diep River.

The authors of this paper argue that “urgent regulation” is necessary to reduce the release of effluents harbouring these chemicals.

The main point, said Petrik, is that these are  "synthetic banned chemicals”, and they “should not be in the ocean in a marine protected area”.

Asked for comment, agriculture, land reform and rural development spokesperson Reggie Ngcobo confirmed that SA is signatory to the Stockholm Convention on Persistent Organic Pollutants, but said none of the products listed in the study were presently included in the convention’s list of persistent organic pollutants.

“The department may review the use of any substances should scientific basis be established,” said Ngcobo.