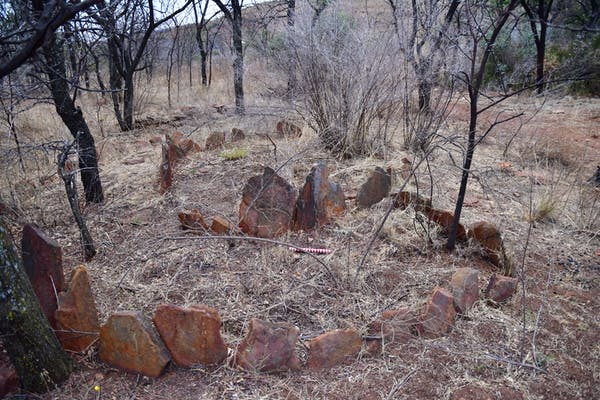 Upright rocks indicate the presence of a hut, since disappeared, with this one possessing a front terrace.
Image: Tim Forssman/ The Conversation

About 50km outside South Africa’s biggest city, Johannesburg, lies one of the most important sites in human prehistory: the Cradle of Humankind. Here, at sites like the Sterkfontein Caves, Swartkrans, Drimolen and Kromdraai, researchers have unearthed amazing fossil evidence from the Plio-Pleistocene (the last five million years). It is especially famous for the discovery of fossilised hominin – ancient human – remains.

But there is a more recent and largely neglected layer to the landscape’s history. My colleagues and I set out to investigate some archaeological traces found in part of the Cradle of Humankind. We focused on a stone-walled structure on a hill known as Driefontein; the name also given to the site we studied.

Our findings suggest that the Driefontein stone-walled structure was a residential area. It appears similar to settlements found elsewhere in South Africa’s North West province and parts of Botswana dating to between AD 1450 and 1700, though certain features possibly suggest a later date. These findings place the settlement’s occupation broadly within the “Tswana” period. This refers to roughly the last 500 years of history when Tswana communities, a southern African ethnic group, arose.

While the prehistoric sequence of the Cradle of Humankind operates at several levels spanning a very long period of time, a disproportionate amount of resources have been allocated to studies concerning human evolution and early stone tool technologies.

While this has global significance, our work is important, too, because it sheds light on heritage traces that reveal much about people’s daily lives. It also helps us understand local, traumatic pasts which involved colonial oppression, land dispossession and racial policies.

Cultural remains such as those found at Driefontein allow archaeology to peel back historical discourse to reveal people’s pasts that are not preserved in any other way.

Our work at the settlement involved an intensive mapping programme conducted over four successive visits. Initially we determined the overall size of the settlement, in order to plan our field programme, and then we examined the layout of the homestead’s dry-packed stone-walled architecture.

To record the site, maps were produced using a combination of handheld GPSs and a Trimble Station; these use satellites to record geo-specific points that can be rendered digitally to resemble the settlement’s structure and features.

Mapping the site is informative; as building designs today differ between people and over time, so did past stone-walled structures. By studying the layout of the settlement, we can then attempt to determine who occupied the site and when. Archaeologists have been doing this from the 1960s and there is a fairly good record of what the different types of sites look like.

By examining the structure of Driefontein, we could then match its architecture to typologies developed over the past 60 years and determine when it was occupied. We can also infer the use of different areas of the site. 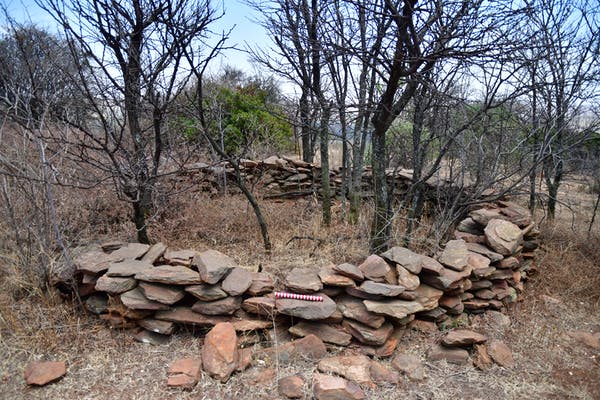 An enclosure inside the western settlement likely used as a kraal for livestock.
Image: Tim Forssman/ The Conversation

There are other ways of doing this, such as through ceramic analysis or archaeological excavations, but at Driefontein very few items remain on the surface and there is no excavatable deposit.

However, two middens were identified. These were used as dump sites and often contain valuable archaeological material such as ceramic sherds, food waste, and personal ornaments. Unfortunately, at Driefontein this was not the case; this meant that studying the walls’ layout was the only viable way of learning more about the history of the site.

Driefontein includes two distinct areas; what we call west and east. Both have large circular structures outside the main walled area. These may have been kraals (enclosures) for livestock. The main portions of the two areas both have an internal walled area with separate smaller enclosures attached. Around this is a discontinuous and scalloping boundary wall. Between it and the inner enclosure are up to 20 individual huts, including several with outside terraces. These are indicated by upright rocks erected in a circular shape with extensions where terraces exist.

There are also grain bin foundations in the vicinity of several huts, which are similar in construction to the huts but are far smaller.

Based on the evidence, as well as the middens and a small collection of earthenware ceramics, the Driefontein stone-walled structure was a residential area. The structure appears similar to settlements dating to between AD 1450 and 1700. However, certain features – notably the upright rocks around the huts and lintels in the outside circular structures – have been identified at sites with a later date. This possibly suggests that Driefontein is younger than we may expect.

Though the settlement’s occupation falls within the “Tswana” period, naming the occupants as Tswana is complicated. That’s because Tswana history is not linear or direct. Rather, there are periods of migration, political growth and assimilation. Tswana origins are also unclear. At times, oral histories note multiple lineages and totems with several different groups appearing and blending with others.

When looking back at early archaeological sequences, such as may be the case at Driefontein, identifying “Tswana” groups is, for these reasons, quite challenging. Nonetheless, based on the evidence, we believe Driefontein was likely occupied by Tswana-like groups after about AD 1450.

This project was done with the involvement of the current landowners of the Nirox Sculpture Park and Project 58, where the site is located. Their interest in the site and openness to researchers is what ultimately led to us learning more of the region’s prehistory.

Our work is far from over. Future studies at Driefontein will help to further acknowledge more recent complex histories, identities and pasts that overlay the deep-time sequences preserved in the Cradle of Humankind’s cave systems.