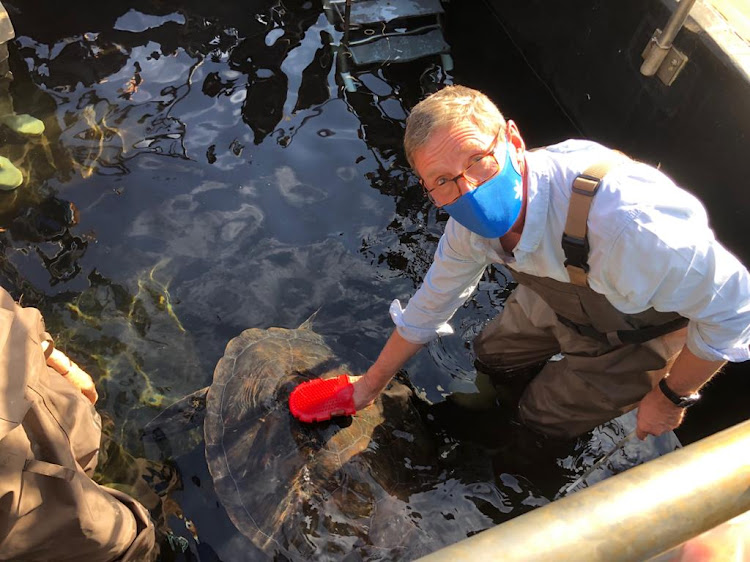 Victoria and Alfred Waterfront CEO David Green administers a back massage to Bob the turtle, a resident celebrity at the Two Oceans Aquarium.
Image: Bobby Jordan

Microplastics have been found inside almost three quarters of turtles (71%) rescued along the South African coastline so far this year, according to the latest turtle rehabilitation statistics coming out of Cape Town.

The figure is the highest percentage to date and a significant increase on previous surveys, prompting concern among marine biologists working for the Turtle Rescue and Rehabilitation Programme of the Two Oceans Aquarium Education Programme.

Levels of microplastic “diet” are considered a barometer of the health of the ocean, particularly among turtles, which typically feed in the deep ocean.

“I’ve been in turtle rehabilitation for five to six years and I’ve never seen as many [microplastics] as we see now,” said Talitha Noble, the education foundation’s conservation manager.

The microplastic ingestion rate has shot up from about 42% earlier this year, Noble told TimesLIVE during a media briefing at the aquarium on Monday. She said the figures were based on observations and stool samples of 60 turtle hatchlings delivered to the aquarium by volunteers along the coast. 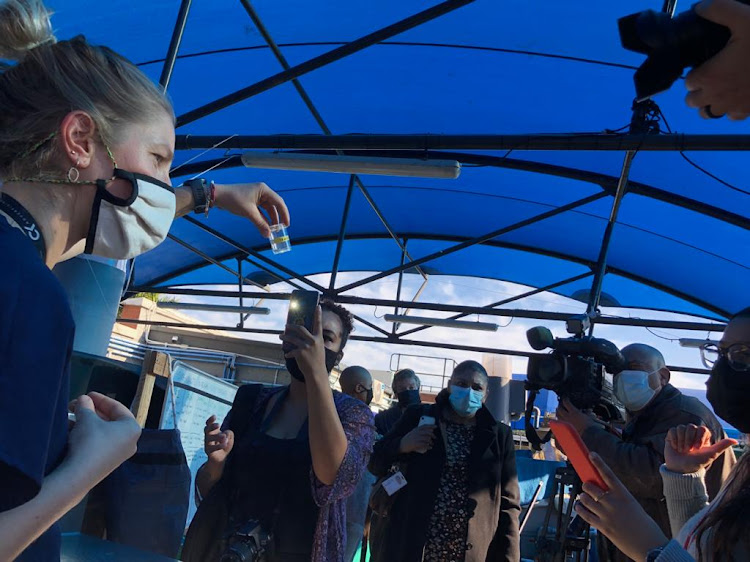 Turtle hatchlings typically wash up on beaches between St Helena and Port Elizabeth, far away from their natural feeding grounds in the offshore Agulhas current. The hatchlings mistake microplastics floating at the surface for their natural diet of edible titbits, such as seagrass.

One rescued hatchling was found with 121 pieces of microplastic in its body. Another died after ingesting a piece too big to be excreted.

The aquarium, at Cape Town’s Victoria and Alfred Waterfront, even has an intensive care unit for creatures in a critical condition. Last year 37 hatchlings and 10 sub-adults were rescued, slightly less than this year’s tally.

One notable Two Oceans resident is Bob, a 16-year-old turtle who enjoys celebrity status among his carers, not least because he enjoys a good back rub. A previous resident, Yoshi, was rehabilitated and released into the wild 20 years after her rescue. She was fitted with a GPS that allowed scientists to follow her 41,000km swim across the Indian Ocean, from South Africa to Australia (after a detour up to Angola).

Victoria and Alfred Waterfront CEO David Green on Monday paid tribute to the marine conservation efforts of the aquarium, which forms part of a broader Ocean Cluster collaboration involving all ocean economy tenants at the V&A.

The V&A is funding a Two Oceans Aquarium marine wildlife management programme aimed at conserving the natural environment and monitoring water quality in the harbour precinct.

The V&A on Monday also committed itself to ocean conservation measures ahead of World Oceans Day on Tuesday.

“The ocean is front and centre of almost everything we do, so we have a dual responsibility to protect the ocean from harm, while still unlocking the economic opportunities it presents,” Green said in a statement.

A tourist dreamscape has turned into a deathtrap at Cape Town’s Victoria & Alfred Waterfront marina, where a millionaires’ playground is under siege ...
News
7 months ago

A kite surfer rescued an injured sea turtle he found struggling in the surf on the KwaZulu-Natal north coast on Sunday.
News
8 months ago

Nearly 1,700 abandoned Cape cormorant chicks were rescued from Robben Island during a two-day joint operation between various marine and wildlife ...
News
1 year ago