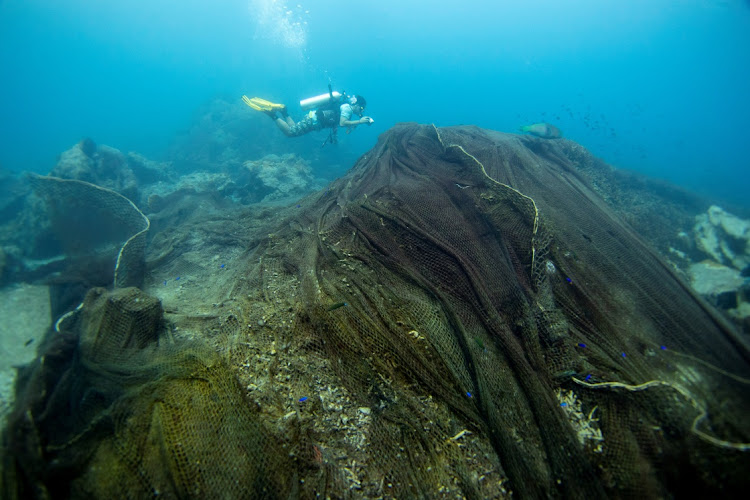 A diver swims past abandoned fishing nets covering a coral reef in a protected area of Ko Losin, where a group of volunteer divers and the Coastal Resources Research Center, helped by the Royal Thai Navy, removed 2,750 sq m of them, Ko Losin, Thailand June 19, 2021.
Image: REUTERS/Jorge Silva

Forty divers have removed abandoned fishing nets covering coral reefs in a protected area in the Gulf of Thailand in a two-day operation ending on Sunday.

Removal of the nets by a group of volunteer divers and the Coastal Resources Research Center, helped by the Royal Thai Navy, revealed long lines of coral bleaching inside the protected area around Ko Losin, a small rocky islet in the southern waters of the gulf.

“Ghost nets are a big problem in Thailand,” said a diver belonging to the volunteer SOS Group, Wannapa Thammasangwan, referring to fishing nets lost or discarded in the sea.

The divers tied plastic bags filled with air to the net to get it to float to the surface, carefully cutting the parts caught in the coral. The divers carried out six trips over the weekend to complete the operation.

“The hardest part of this operation was removing the fishing net from staghorn coral because it was full of branches and fragile,” said Chanchot Piriyasatit, a dive master volunteer.

“This one was not the biggest. Every year we remove nets like this here,” said Wannapa.

Wannapa and other divers spend a lot of time investigating reports of fishing nets choking reefs in Thai waters, making at least five removal expeditions a year at their own expense.

After the nets were removed on Sunday — from depths ranging from 13m to 26m — about 500 sq m of bleached reef was discovered.

The reef is expected to recover in two to three months.

About 640,000 tonnes of fishing nets end up in the ocean globally every year, becoming ghost gear, according to the United Nations.