'Meteor' seen in evening sky was likely a rocket plunging back to Earth, say astronomers 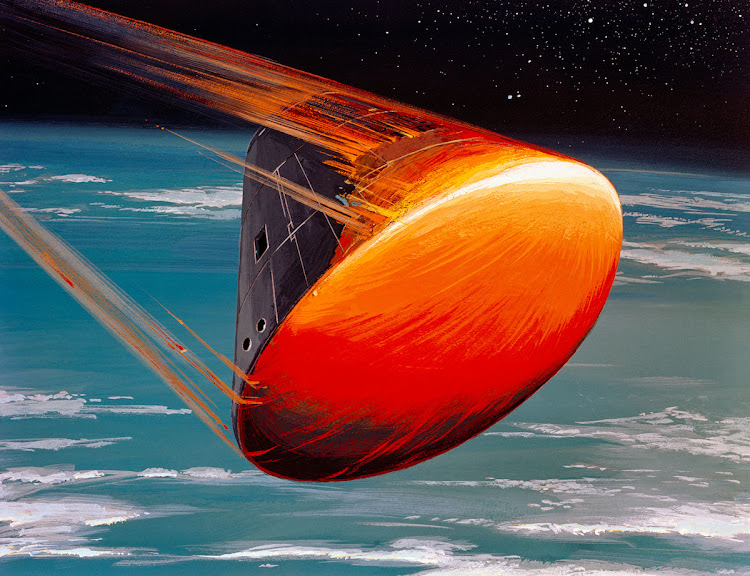 An artist's impression of the command module from a Nasa Apollo mission heating up as it re-enters Earth's atmosphere from space. The streak of light seen in southern skies on Tuesday was likely a Chinese rocket burning up in the atmosphere after successfully launching satellites earlier in the day.
Image: Wikimedia Commons

The streak of light that blazed across Southern Africa's evening sky on Tuesday was most likely a rocket re-entering Earth's atmosphere and not a meteorite, according to astronomers.

The nature of the break-up and its speed across the sky point to satellite or rocket re-entry, and not a meteor or fireball, said Tim Cooper of the Astronomical Society of Southern Africa (Assa).

“It does not match the predicted decay time of any known satellites, including Starlink 1935, which was predicted to decay earlier today [Tuesday].”

Assa was looking into the possibility that it was one of three stages from the Long March 2C rocket which launched satellites from the Jiuquan Satellite Launch Centre in Inner Mongolia on Tuesday.

This happened last night just after 6pm, it could be seen across SA☄️. Not a meteor shower, but one single meteor breaking up upon entry… not very often that we get to see this so I wanted to share😍 pic.twitter.com/HoJ3uqsmRx

“We are pretty sure it was a Chinese rocket. It was launched yesterday, the payload is secret so we don't know what they launched but presumably it was some sort of satellite.”

The blazing trail across the night sky was most likely one of the rocket's stages burning up as it re-entered Earth's atmosphere, he added.

“The upper stage would have gone up and deployed the satellite and then performed a deorbit burn. They would have targeted coming in over the sea — one would hope — but it's a fine art trying to get it right. If there's an issue with the motors or something, it can be a bit unpredictable when and where it comes in.”

Debris from rocket launches usually burns up rapidly on re-entry as a result of the extremely high temperatures that develop as the speeding object encounters atmospheric drag.

My husband and I are convinced we just saw a #comet!! We parked on the side of the road to capture it! pic.twitter.com/AphiAP34fj

Re-entries can be uncontrolled, such as with space debris, or controlled in the case of reusable spacecraft, such as the now-retired US space shuttle.

On February 1 2003, the space shuttle Columbia broke up soon after re-entering the Earth's atmosphere. The shuttle was travelling at a speed of more than 23,000km/h when it began breaking up about 64km above the Earth's surface, killing all seven crew members.

An investigation determined that tiles on the spacecraft's heat shield had been damaged during the launch days earlier, allowing heat to destroy the craft's wing structure which then failed in-flight.

Previously, the most alarming incident of human-made debris colliding with Earth occurred in 1979 when the 77-ton US Skylab space station fell out of orbit and disintegrated on re-entry, spreading debris across the Australian outback. There were no crew aboard at the time.

I have just seen a remarkable sight south of #Bulawayo - appears to be a meteorite . Look closely at the video I took. pic.twitter.com/Pkl1XApNDX

“That was a really big one,” said Cunnama. “You need the parts to be quite big for them to hit the ground.”

Cunnama noted that while the chances of large space debris such as asteroids impacting the earth were a possibility, this was unlikely in the very short term.

“We are tracking most of the largest objects in the solar system,” he said. “We're pretty confident that 99% of the asteroids [bigger] than 100m that we have detected do not have a dangerous path in the next 100 years or so. Those are the real civilisation-destroying asteroids, but we're not expecting one of them any time soon. But, of course, one could pop out from behind the sun at any point.”

There was a sliding scale, with smaller rocks entering Earth's atmosphere more frequently.

We're pretty confident that 99% of the asteroids [bigger] than 100m that we have detected do not have a dangerous path in the next 100 years or so. Those are the real civilisation-destroying asteroids, but we're not expecting one of them any time soon. But, of course, one could pop out from behind the sun at any point.

“There are shooting stars on any given night. Those are small, maybe a few centimetres across,” he said.

Bigger asteroids were expected once a year or even less often, he added.

While there was a lot of debris in the solar system, it was all orbiting the sun.

“The planet has also swept a pretty clear path over the years,” he said. “And Jupiter protects us from a lot of the bigger rocks because it disturbs their orbit and they are more likely to crash into Jupiter than us.”

The satellites, which were designed and built at the China Academy of Space Technology, blasted off aboard a Long March-2C carrier rocket from Jiuquan Satellite Launch Centre in northwestern China at 7.15pm, it confirmed.

Casc said the satellites would be used to “test communications technologies”.

Fancy a giant leap into space in Branson's Virgin Galactic? It'll set you back R6.5m

Passengers can either purchase a single seat, a multi-seat package or a full-flight buy out.
Lifestyle
1 year ago

As it’s twice as massive as all the other planets in our solar system, Jupiter always shines brightly in the night sky — and never more so than when ...
Lifestyle
11 months ago