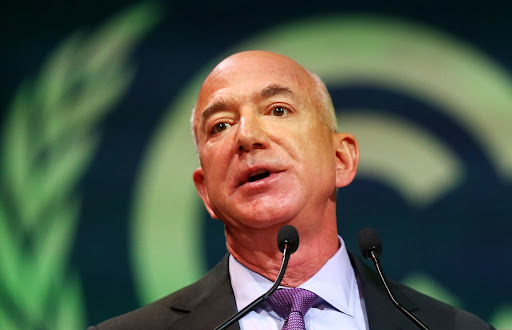 Bezos, 57, has been on a giving spree this year after stepping down as CEO of Amazon.com Inc. and flying to the edge of space on one of his Blue Origin rockets.
Image: Bloomberg

Jeff Bezos announced $443 million in donations to climate organisations Monday as the world’s second-richest person ramps up his philanthropy.

The most recent contributions are in addition to the $791 million he gave to 16 organisations last year as part of his $10 billion commitment to his Earth Fund to fight climate change. Bezos has promised to distribute the full amount by 2030.

Of the 44 grants announced Monday, $130 million goes to help the Justice40 initiative, an effort by President Joe Biden’s administration to fight climate change and support disadvantaged communities. Another $261 million is for a plan to protect 30% of land and sea by 2030, with a focus on the Congo Basin and tropical Andes. The remaining $51 million will support land restoration in the US and Africa.

“The goal of the Bezos Earth Fund is to support change agents who are seizing the challenges that this decisive decade presents,” Andrew Steer, the fund’s CEO, said in a statement.

Bezos, 57, has been on a giving spree this year after stepping down as CEO of Amazon.com Inc. and flying to the edge of space on one of his Blue Origin rockets. Today’s announcement brings his total giving to more than $1 billion, including $100 million to the Obama Foundation and $200 million to the Smithsonian National Air and Space Museum.

Bezos recently laid out his plans for the Earth Fund, which includes committing $2 billion towards restoring nature and transforming food systems. He made that announcement to coincide with the COP26 climate summit in Glasgow, Scotland, last month, which he attended alongside world leaders and activists.

The giving come as Amazon, where Bezos is still executive chairman, faces controversy from labour activists amid fights for unionisation at its warehouses. After losing a union vote at an Alabama warehouse, the Retail, Wholesale and Department Store Union is alleging that Amazon intimidated workers and pressured them to cast votes in a mailbox the company had installed on its property in view of security cameras. Amazon denied any wrongdoing. A second vote will be held.

Bezos is worth $195 billion, according to the Bloomberg Billionaires Index, mostly from his Amazon stake.

Monday’s flood drama in George, caused by a downpour of about 40mm in an hour, was just the beginning of a week of weather troubles that also ...
News
1 month ago

COP26 wrapped up after a conference that for the first time acknowledged nature's critical role in healing the planet. What does this mean for Africa?
Opinion & Analysis
2 months ago