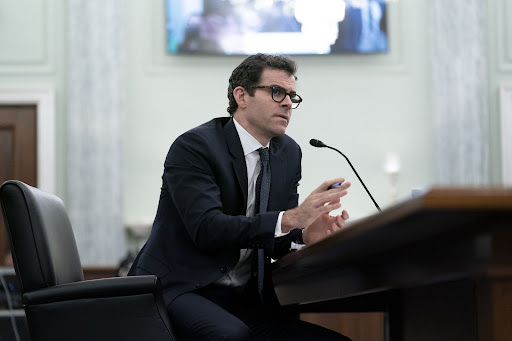 The effect of Instagram on teenagers was thrust into the spotlight earlier this year after the Wall Street Journal and a consortium of media organisations published a series of damming reports based on internal documents disclosed by Facebook whistle-blower Frances Haugen.
Image: Bloomberg

The executive who runs Instagram faced tough questions on Wednesday from US senators over whether the photo-sharing app puts profits before the wellbeing of young people.

“I want to assure you we do have the same goal: We all want teens to be safe online,” Mosseri said during the hearing. “This is an industry-wide challenge that requires industry-wide solutions and industry-wide standards.”

Many senators, however, rejected Mosseri’s conclusion.

Mosseri replied that the company tries to make the network as “relevant” as possible while also investing in programs to maintain users’ safety.

The testy exchange, and other pleas from lawmakers for Mosseri to understand the real-world harm his platform causes, is part of growing political backlash over the company’s handling of young users.

The effect of Instagram on teenagers was thrust into the spotlight earlier this year after the Wall Street Journal and a consortium of media organisations published a series of damming reports based on internal documents disclosed by Facebook whistle-blower Frances Haugen.

The documents exposed how the company’s social networks spread hate speech and misinformation and harm the mental health of vulnerable teenagers. Company executives also privately worried about how its social networks were at risk of losing users among teens and young adults.

Lawmakers said the revelations by Haugen are adding to the bipartisan momentum to set tougher rules for privacy and platform accountability.

“Parents are asking, what is Congress doing to protect our children?” said subcommittee Chair Richard Blumenthal, a Connecticut Democrat. “The resounding bipartisan message from this committee is: legislation is coming. We can’t rely on trust any more. We can’t rely on self-policing.”

Mosseri argued that tech companies should only receive legal protection from liability for user-generated content if they adhere to children’ safety rules established by a new oversight body — part of his pitch to diffuse congressional anger at the social media giant.

Twitter is an increasingly violent platform for women, a new study by Amnesty International SA found.
News
1 month ago

The proposal from Mosseri expands a previous call from Meta CEO Mark Zuckerberg for lawmakers to update technology companies’ legal shield, known as section 230 of the Communications Decency Act of 1996. Critics say reforming the law would only benefit dominant platforms that have resources to devote to complying with the new legal requirements.

Under Mosseri’s proposal, Congress would form “an industry body that will determine best practices” for how tech companies should keep children and teens safe online. In consultation with outside experts and advocates, that group would develop uniform standards for how internet platforms verify the ages of their users, design age-appropriate experiences and include parental controls in their services, Mosseri said.

Mosseri, who has been with Meta for 13 years and previously led the company’s News Feed product, repeatedly said much of that content is already prohibited, even though senators insisted that it’s still easy to find on the platform.

“I just feel there is a kind of real lack of connection to reality” in Mosseri’s testimony, Blumenthal said.

For years, Meta has called on Congress to pass new regulations for online platforms in the face of bipartisan criticism that the company doesn’t do enough to protect users’ safety, privacy or wellbeing on its social networks. While lawmakers have proposed several section 230 bills, there is little consensus among them on the best strategy to force tech companies to improve their business practices.

Mosseri touted a recent announcement by Instagram about a handful of new product features designed to improve teen safety and parents’ visibility into their children’s digital behaviour. The changes will let users of the photo-sharing app set a reminder to take breaks from scrolling, limit the interaction between teens and people they don’t follow and provide more tools for parental control.

There is a such a frustration that you turn a blind eye towards taking responsibility and accepting accountability for your platform.

“Instagram pushed forward with what I call half-measures on the eve of the hearing trying to show that they are willing to give parents more tools in the tool box to regulate how children are online,” Tennessee Senator Marsha Blackburn told Bloomberg Television in an interview before the hearing.

“It is not enough to satisfy parents who are concerned about this.”

One of the most troubling revelations from the Facebook documents shared by Haugen was that Instagram often makes teenagers who already have body-image issues feel worse about themselves. Both Democrats and Republicans have pointed to that internal research as proof that Facebook understood potential harms for its youngest users, but hid that information from Congress and the public.

“There is a such a frustration that you turn a blind eye towards taking responsibility and accepting accountability for your platform,” Blackburn said.

Later in the hearing, Blackburn asked Mosseri to speak to parents whose children have harmed themselves because of their experience on Instagram. He touted parental controls and said he understands that some parents just don’t have time.

“It seems as if you just can’t get on that path,” Blackburn said. “I wish your response had been more empathetic”

Mosseri also repeated Facebook’s earlier defense of its internal studies, arguing that the findings were taken out of context and some of it was based on a small sample size. He added that the same research found that many teen users said Instagram helped them navigate “hard moments.”

“Our goal with all of the research that we do is to improve the services that we offer,” Mosseri said in prepared remarks. “That means our insights often shed light on problems so that we can evaluate possible solutions and work to improve.”

A curious Ermelo teenager who came across a picture on Facebook of a woman who looked just like his mother has helped Mpumalanga police solve a ...
News
1 month ago

Dorsey, who cofounded Twitter in 2006, is leaving after overseeing the launch of new ways to create content through newsletters or audio ...
News
1 month ago