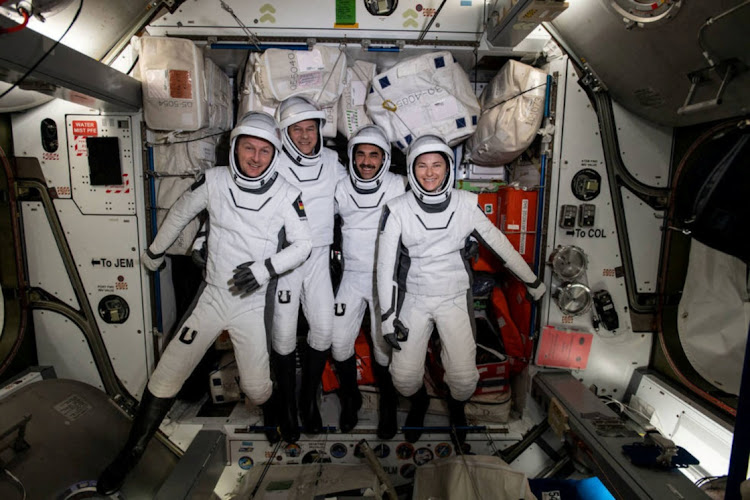 The third long-duration astronaut team launched by SpaceX to the International Space Station (ISS) safely returned to Earth early on Friday, splashing down in the Gulf of Mexico off Florida in the US to end months of orbital research ranging from space-grown chilies to robots.

The SpaceX Crew Dragon capsule, called Endurance, carrying three US Nasa astronauts and a European Space Agency (ESA) crewmate from Germany parachuted into calm seas in darkness at the conclusion of a 23-hour-plus autonomous flight home from the ISS.

Astronauts land safely on Earth after 175 days in space

A team from SpaceX's spacecraft Endurance has landed off the coast of Florida in the US after 175 days aboard the Space Station.
News
1 month ago

Thermal camera video of the splashdown, at about 12.45am. EDT (04.45 GMT), was carried live by a joint Nasa-SpaceX webcast.

Chari could be heard radioing thanks to mission control moments after splashdown.

In less than an hour, the heat-scorched Crew Dragon was hoisted onto a recovery ship before the capsule’s side hatch was opened and the four astronauts were helped out one by one for their first breath of fresh air in nearly six months.

Dressed in white-and-black spacesuits, their strength and equilibrium shaky from 175 days in a weightless environment, they were assisted onto special gurneys while they waved and gave thumbs-up for cameras.

Each was due to receive a routine medical checkup aboard the ship before being flown by helicopter to Florida.

The return from orbit followed a fiery re-entry plunge through Earth’s atmosphere, generating frictional heat that sent temperatures outside the capsule soaring to 1,930ºC.

Two sets of parachutes billowed open above the capsule in the final stage of descent, slowing its fall to about 24km/h before the craft hit the water off the coast of Tampa, Florida.

Applause from the SpaceX flight control centre in suburban Los Angeles was heard over the webcast.

The newly returned astronauts were officially designated as Nasa’s “Commercial Crew 3”, the third full yfledged, long-duration team of four SpaceX has flown to the space station under contract for the US space agency.

Space flight customers turn to other options than the launch vehicle that has made over 2,000 flights
World
3 months ago

SpaceX, founded in 2002 by Elon Musk, the billionaire CEO of electric carmaker Tesla Inc who recently clinched a deal to buy Twitter, supplies the Falcon 9 rockets and Crew Dragon capsules flying Nasa astronauts to orbit from US soil.

The company also controls the flights and handles the splashdown recoveries, while Nasa furnishes the crews and launch facilities at the Kennedy Space Center in Cape Canaveral, Florida, and manages US space station operations.

California-based SpaceX has launched seven human space flights over the past two years — five for Nasa and two for private ventures — as well as dozens of cargo and satellite payload missions since 2012.

Crew 3 returned to Earth with about250kg of cargo, including ISS research samples.

Aside from carrying out routine maintenance while in orbit 400km above Earth, the astronauts contributed to hundreds of science experiments and technology demonstrations.

Highlights included studies of the genetic expression in cotton cells cultured in space, gaseous flame combustion in microgravity and the DNA sequences of bacteria inside the station.

Barron and Chari performed a spacewalk to prepare the station for another in a series of new lightweight roll-out solar arrays, to be used eventually on the planned Gateway outpost that will orbit the moon.

'The sales pitch for going to Mars is it’s going to be cramped, dangerous and difficult.'
News
4 months ago

In KwaZulu-Natal, the number of virally suppressed people rose from 42% to 92% thanks to the insights artificial intelligence delivered in more than ...
News
1 month ago

The Cape Town-based start-up crowdsources AI by inviting companies to post a challenge on its site, and posing the challenge to a community of more ...
Business Times
2 months ago

SA is reaping the whirlwind after ignoring warnings of climate change, scientists say

Extreme weather like the catastrophic floods that hit KwaZulu-Natal is becoming increasingly common in SA because of climate change, and the ...
News
2 months ago